We’re kids. Somebody has a basketball in their hands. Without warning they use both arms to shove a pass toward me shouting, “Think fast!” If I did (think fast enough), then I’d extend my arms and catch the ball before it hit me in the chest. If I failed (to think fast enough), then I might find myself gasping for breath. And when I caught it, I’d likely go tearing after the guy who hit me. Catch the ball or retaliate. Either way, I win. 😉

That whole “think fast” game we played at kids had value. For starters, always pay attention. You could be blindsided at a moment’s notice, like Cata’s sneak attacks on Inspector Clouseau.

When a basketball is coming at you hard from four feet away, there’s no time to ponder. In fact, before my friend has a chance to say, “Think fast” I already am at full throttle to get my hands up to catch the ball.

It happened to me about a week ago. The details don’t matter. I started considering this whole speed thing when it comes to making up our mind, or changing our mind, or deciding something, or doing something. Or all of the above.

Recently, much of my work has been focused on things like character, values, and principles. Namely, as it relates to leadership and culture. What we believe determines our character, our values, and our principles. These aren’t static things. That doesn’t mean they change with the wind, but it does mean our experiences, learning, understanding, and growing can adjust them. Usually, that happens gradually and slowly. But not always. It depends on how we’re living.

This college admissions/Wall Street scandal is dominating news lately. Until it hit the fan, these folks, including Hollywood actors and actresses, were living whatever normal might describe their lives. Suddenly, when the FBI knocks on your door, you experience a “think fast” moment. Steve Farber has another name for it, an “Oh-S#@!-Moment” or OSM! for short.

In these cases, I suspect panic ensues in less than 30 seconds. Decisions to call attorneys are likely the only decisions to make. That, and the decision to keep one’s mouth shut.

None of us can argue that lives can be dramatically altered in mere seconds. I often think about the song by Matt Kearney, a Nashville singer-songwriter, “Closer To Love.” We’re all just one phone call from our knees.

Do you suppose the values, character, and principles of any of the indicted people in the college/Wall Street scandal have changed? Well, if they’re guilty of what they’re accused of, I’d hope so. I’d hope seismic shifts have happened for them so they’ll learn, understand and grow. So it goes with values, character, and principles…when we’re behaving badly because those components in our life are poor quality.

But I’m talking about changes we make in our own mind. On our own. Meaning, we decided. Not that we did it alone without any input or impetus, but nobody did it for us. Within seconds some shift occurred to change our mind. Within seconds we made a decision that set us on a different path than the one we previously had decided we’d travel.

People often challenge us to go with our first answer. Follow your gut. The same people may also criticize us if we’re too impulsive. Or not thoughtful or intentional enough.

Well, which is it?

It depends. And you know what it depends on. It depends on whether you got it right – as they see it. If your first answer was the right one – meaning, they think it was the right answer – then you should go with that one. If your first answer was the wrong one – meaning, they didn’t agree with it – then you need to give it more thought.

Forget what other people think. Instead, think about what’s right. This is why I’m increasingly fascinated with character, values, and principles. The guiding beliefs behind our decisions and actions are everything. Each of us is going to behave in ways congruent with what we believe. That’s why we often urge our children and young adults in our lives to “guard their heart.” We want them to protect themselves from allowing their character, values and principles to erode. It’s also why we care about who our kids hang around. We want them to be around good humans who embrace the values we prize most.

Thirty seconds to decide is both an exercise and a practical tool.

Watch any true crime show on the Investigation Discovery channel and you’ll see people who within seconds made really bad choices to murder. For reasons I don’t understand, within seconds that seemed like a good decision to them. Mostly, because it reflected the terrible state of their character, values, and principles. So job one is – be a good human being. Be as good as you can possibly be. Embrace honorable beliefs so you’ll serve humanity well.

That may explain the apparent wisdom (sometimes) of going with your first answer. It’s likely why so many assessments or tests urge the participant to trust their first answer. Your first answer may more properly reflect your true character or personality.

What’s the current impediment to your higher success? What’s keeping you from reaching whatever “the next level” is in your leadership or your life? What’s the constraint standing in the way of your company finding the next rung on the ladder of achievement?

Eliminate every answer that is outside of yourself. This will be tough. You’ll want to blame people, capital, opportunities, challenges and whatever else you can. Don’t. I’m not saying those things aren’t real, but I am saying those may not likely be THE thing standing in your way. More likely than not, you – and a decision only you can make – is the hurdle.

What haven’t you decided that you know you should decide if you’re going to move forward? Quick, think fast. Thirty seconds. Make up your mind in the next 30 seconds to change it.

We fool ourselves into thinking we need more time. Maybe we do. Sometimes. But mostly, I’m growing increasingly less sure about that. We need time to figure things out. To learn and understand and grow. To forge relationships where we can serve. And where we can be served. But each of those can begin right now. This very moment.

Like encouragement, decisions can happen in a flash. Earlier this week I was given a handwritten note. The person listens to my hobby podcast, Leaning Toward Wisdom. She listens to this podcast, too – Grow Great. But over at Leaning Toward Wisdom I’ve grown more focused on a project I’ve labeled #CravingEncouragement. I’ve long loved the little parable of the starfish.

One day, an old man was walking along a beach that was littered with thousands of starfish that had been washed ashore by the high tide. As he walked he came upon a young boy who was eagerly throwing the starfish back into the ocean, one by one.

Puzzled, the man looked at the boy and asked what he was doing. Without looking up from his task, the boy simply replied, “I’m saving these starfish, Sir”.

The old man chuckled aloud, “Son, there are thousands of starfish and only one of you. What difference can you make?”

The boy picked up a starfish, gently tossed it into the water and turning to the man, said, “I made a difference to that one!”

I open this little note given to me by this listener and enclosed what a little picture she’d drawn depicting the little boy tossing a starfish back into the ocean. 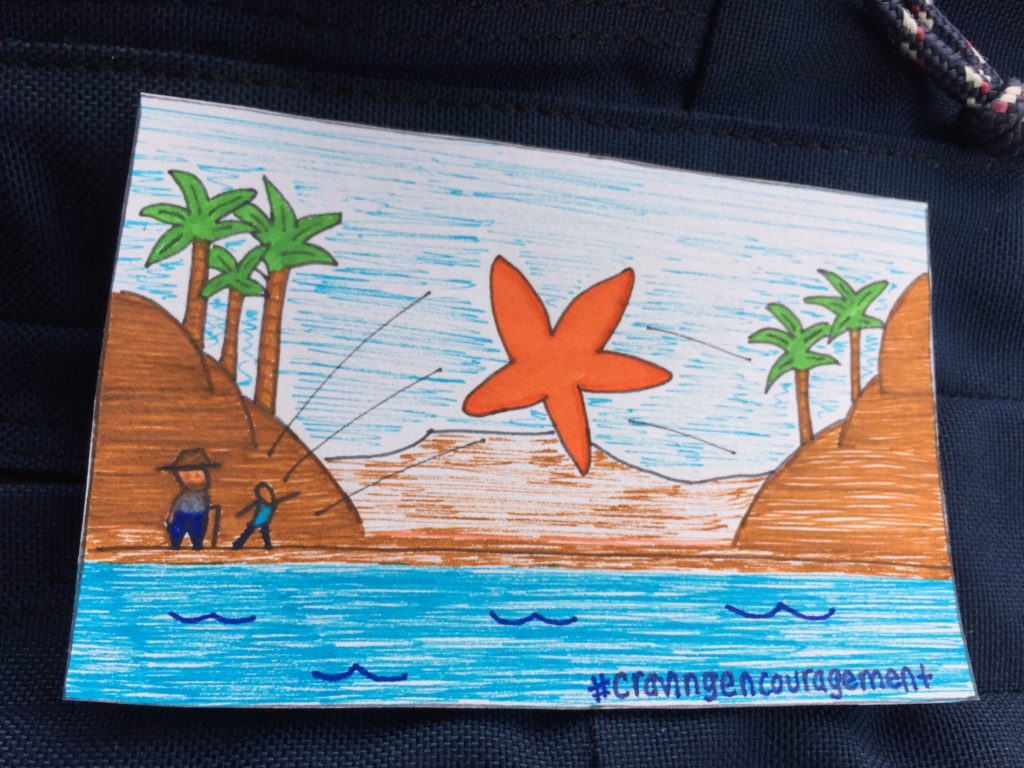 It didn’t take me 30 seconds to read the nice note and look at the drawing. The impact lasted much, much longer. And so it goes.

I suspect she decided in a moment to create that drawing and write that note. She spent some time doing it, but her decision was likely fast. My reaction was also fast. The feeling I got the moment I opened it changed immediately. I wasn’t having my best day ever. But in a “think fast” moment, it all changed because she took the time to do this for me. She expressed feeling like a starfish for whom I made a difference when in reality I’m the starfish for whom she made a difference.

I’m closing out this week with an offer to you if you’re a small business owner in the United States willing to decide right now that you’d like to be more intentional and thoughtful about who you surround yourself with. I’m forming a 7-member peer group, mastermind group (call it whatever you’d like; I call it THE PEER ADVANTAGE). Quite literally, it’s my starfish project to serve just 7 entrepreneurs in a virtual group that will meet regularly using video conferencing technology where we do for each other what nobody else can or will. Details are at ThePeerAdvantage.com. Go there right now – it won’t take 30 seconds to get there – and click on the APPLY NOW button (you can read the details if you’d like), but please apply now because there’s no obligation. You’ll just complete a short Google form so I can learn a few things about you and your business, then we’ll schedule a phone call so I can learn more (and you can ask whatever questions you’d like). I look forward to hearing from you.