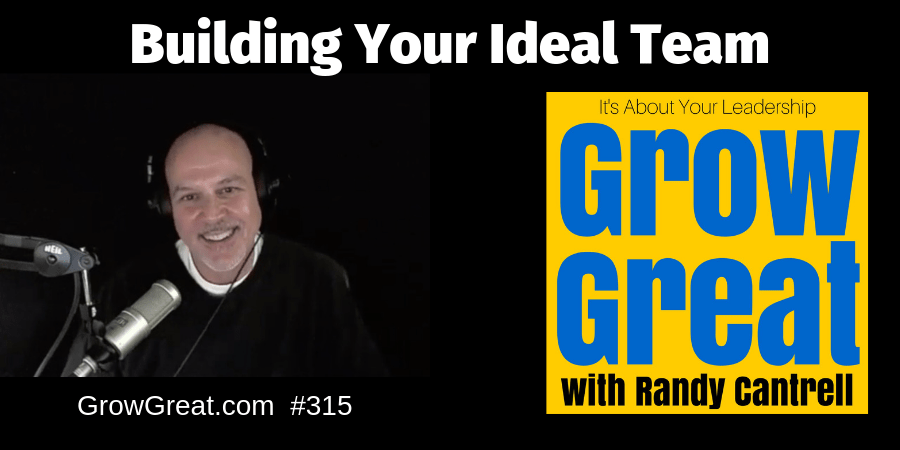 I can’t remember the last time I passed an entire week without talking with a business owner or CEO about constructing a better team. The people problem persists. Recruiting, training and retaining people who can help take the enterprise to new heights has always been a challenge. But too often we make it harder than it needs to be. Mostly because we neglect to give it the attention it deserves.

Over 25 years ago I went to hear Tom Peters. He used to come to the DFW area every few years. I’d go see him every time he came. I’ve always found him thought-provoking and my fondness likely stems from being a young man when In Search Of Excellence was published (1982). He resonated with me.

Well, during this presentation – which wasn’t a speech as much as a presentation because people were seated around tables and Tom would walk amongst us while talking with a comprehensive slide deck serving to illustrate his points – he talked about how much effort the NFL puts into assembling a team. General Managers have teams of scouts and other people dedicated to studying film of college players. Countless man hours are applied to the team every season. Makes sense because that’s their business, a team sport. It requires building the strongest team possible so you can compete. Tom made the analogy that our businesses aren’t much different. People make the difference.

I instantly thought, “Yeah, I agree, but NFL teams have game film to watch, previous coaches to interview about the player, and a lot more data to consider than I ever have with prospective hires.” But I didn’t want to be completely dismissive of Tom’s analogy. I knew I could give it greater effort. And I knew there had to be some strategies I could deploy so I could act with greater efficiency. I needed to be more intentional about it all.

Since then I’ve found almost every CEO or SMB owner suffers the same challenge. And I know why. We too often hire out of desperation. We have a pressing need, then we seek to fill it. That’s the extent of the strategy. Immediate need.

I started to think about being more proactive because there were times early in my career when I’d done that instinctively. But along the way something happened. I didn’t get smarter. I got stupider. I started chasing my tail. By the time I got to the mid-1980’s I was figuring out how to stop chasing my tail so much. Fire fighting is part of the task and I rather enjoyed that part of it. What I hated was feeling forced to act out of desperation. So I began to think more strategic. To give greater effort to being prepared. To think ahead.

What would you do if THE key employee you most rely on suddenly resigned?

I often ask leaders this question and most have no answer other than, “I hope it doesn’t happen.” I’ll press them. “But what if it does?”

Panic! That’s what would happen.

I’m not saying that we’re all prepared for such events, but we’d do well to think about it more. To pre-think it and prepare. To develop a plan.

So how would you build your ideal team?

Let’s start by defining “ideal.” I’m not talking about a perfect team. I’m talking about the team that would be ideally suited to achieve what you want. The team of people capable (and willing) to help you grow your enterprise.

Step 1 – Shore up the weakness that’s killing you.

You likely have chronic weak areas. If you’re like most of us, these areas have been problematic for too long.

Don’t accept shallow answers. Dig deep enough to really discover, maybe for the first time ever, why this area is THE ongoing problem. Don’t be fast to blame external forces. Look in the mirror and figure out what you and your company may be doing poorly to contribute to this. Training, compensation, culture – test them all to find out why you’re consistently weak in this area.

Soar with your strengths is a great way to roll, but I wonder – can you turn your weakness into a strength? What if you could?

By starting with your weakest area you can stop the bleeding in multiple areas. Inefficiency in getting the work done and lower performing culture. That’s why I first focus on this area even though my natural tendency is to lean into areas of strength and make them even stronger.

When it comes to team construction weak areas have a devasting impact. Think of it like triage. Doctors in the ER examine patients according to how dire their circumstance. A person with a severe head wound trumps a broken arm. A heart attack trumps a badly sprained ankle. So it goes with your company. Go where the need is greatest to build your ideal team.

Note: This likely will mean you need to eliminate people who should have been removed long ago. Don’t beat yourself up for living with them. Be fair. Be legal. Get busy doing what you must to correct poor performance. That may include eventually getting rid of people incapable or unwilling to help your company win.

Step 2 – Make your strength even stronger.

This begins with not taking it for granted. Go back to that question about the sudden resignation of a key employee. It’s not always the result of taking them for granted, but it often is. Stop it. Embrace gratitude.

Don’t assume making your strength stronger involves adding people. Maybe it does. Maybe it doesn’t. It most certainly involves you not taking it for granted – not assuming it’ll always be this way.

Protect your strength. Keep investing in it. Pay attention to it.

Add to it if you want. But whatever you do, grow it even stronger.

Step 3 – Create a high-performing culture. Nothing will attract talent more, and keep it longer.

The name of the game is victory. You’re in business to win. In the market. In the mind (and wallet) of the customer.

Everybody is putting in hours.

An NFL game consists of four 15-minute quarters. Sixty minutes. Both teams will invest the same 60 minutes into the game (or more if it goes into overtime). At the end of the game, one locker room celebrates while the other bemoans the loss. Which locker room do you want to be in? As the CEO or owner it’s your job to establish the expectation, focus and effort required to create a winning locker room.

Top-performers want to play with other top-performers. It transcends roles. High achieving salespeople want to interact with and associate with high-performing accounting people. Don’t be narrow-minded in thinking that only some areas of your business need “A” players. Work hard to put as many “A” players into every role within your organization.

Birds of a feather and all that. It matters. Talent attracts talent.

You can’t have a high-performing organization if there’s a place for everybody in your company. The culture must be selective IF you’re going to have a top-notch culture. You have to be intolerant of mediocrity. Poor effort, poor habits, and poor performance are culture killers. Don’t accept them.

Here’s a key. You must work on all three steps simultaneously. Always. You’ll never be done. The work is never finished. Constant, ongoing attention is required. Make up your mind. Commit to it. You’ll reap the rewards.

I’ll leave you with what Jack Welch taught the world. At least he was the first to articulate it where it made sense for me. Welch was always in the process of dumping the bottom of his rosters. He was always searching for ways to improve the roster.

Make room for good people. No matter what. If somebody must go, you likely have plenty of candidates who should be moved along to make room. That strategy continues to improve the roster and help you achieve your ideal team.

Next post: Create A Movement: The Best Way To Implement Change (317)