Today’s show is brought to you by The Peer Advantage by Bula Network, a professional paid peer advisory group – a mastermind group – for small business owners from around the United States. Find out all the details at ThePeerAdvantage.com.

Today we’re continuing our series on self-awareness by focusing on accepting responsibility for ourselves. All of ourselves. Every bit of it.

Isn’t it ironic that most of us want more control over our lives, but when we’re faced with accepting control we sometimes would rather defer to something else, or somebody else? Right now we’re going to do our best to change that. We can at least get started and if we keep it up, we can make this a permanent change. 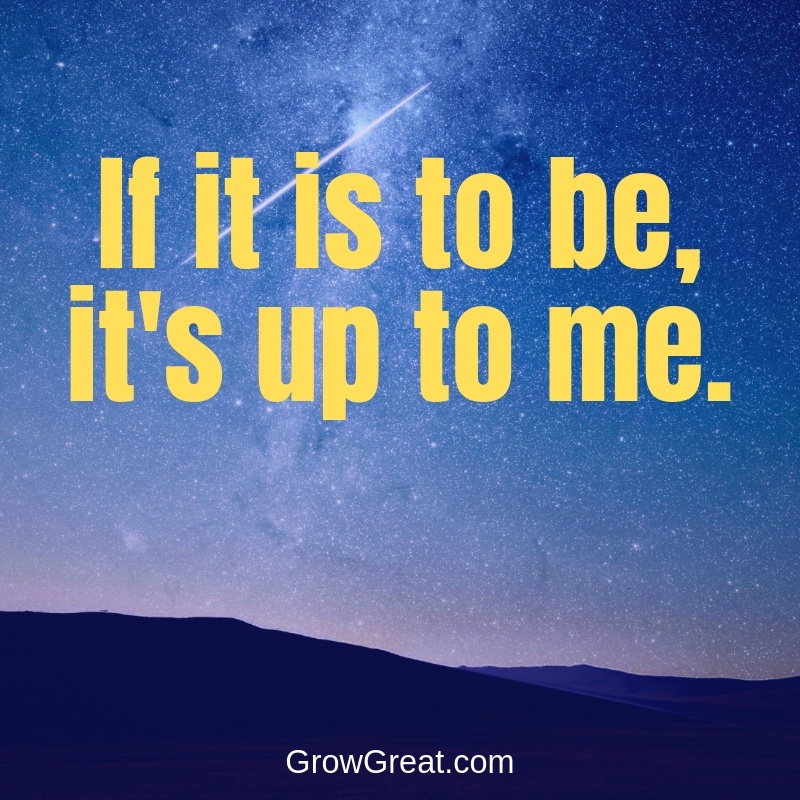 That doesn’t mean we’re isolated, alone or solely responsible for everything. It’s not the minimization of others. Truth is, it’s doing right by others because it helps us stop blaming others for things we can (and should) control.

Years ago a guy here in Dallas, William Oncken, wrote a book entitled, “Management Time: Who’s Got the Monkey?” It’s really a book about delegation and getting things done, but there’s an underlying subtext of ownership. Taking ownership of the work can kill our ability to delegate. On the flipside, when it comes to our own lives, we must take ownership. In this case, delegation is tantamount to believing we’re the victim so we give ownership or our problem to somebody else. The problem? That means we surrender ownership of changing our situation to somebody else, too.

“In the long run, we shape our lives, and we shape ourselves. The process never ends until we die. And the choices we make are ultimately our own responsibility.”  – Eleanor Roosevelt

“If you could kick the person in the pants responsible for most of your trouble, you wouldn’t sit for a month.”  – Theodore Roosevelt

“The final forming of a person’s character lies in their own hands.”
– Anne Frank

Step 1  You Must Be Done With Excuses

Seems to me one of the distinctions between the two – and something that can contribute to how long we stay comfortable with our excuses – is the value or benefit derived from living with excuses. The notable value I see is attention. Some people garner more attention (because they seek it) for suffering. They enjoy the sympathy others express toward them. If that sympathy stops, they forge ahead into some new problem that can stir up new sympathy. They’re hooked on the attention so they fall in love with their excuses. Without those, the sympathy river dries up.

Ask yourself, “Do I want to be seen as a victim or as a person in control of their life?”

Victims even answer it as you’d expect. We all want to be seen as people in control and command of our lives. But…

With victims it’s conditional. When things go well, they want credit. When they don’t, they need an excuse.

This is hard because logic and reason don’t often enter into it. Emotions take over. Feelings, which we’ve likely had for a long time, are hard to change. That’s why I’ve urged us all to change what we’re doing in order to help change how we feel – and what we believe.

Question: What value do YOU provide others by embracing your excuses? How do your excuses make you bring higher value to the people who surround you?

Finish it. For once, be brave and answer it as fully as you can. Here’s what you’ll discover. Your excuses serve somebody, but they don’t serve everybody. Only one person derives anything from them. And even though the excuses feel like a positive because people feel sad or sorry for us, they’re damaging us every time we get sympathy.

Everybody suffers. Everybody loses. You lose the most because you believe external circumstances solely determine the outcomes of your life. You’re just a blob of flesh with strings attached to the universe, who can pull them at will. What’s the point in even having a brain if you’re only going to use it to suck sympathy from everybody around you?

Don’t think entrepreneurs are capable of this behavior?

Just ask a dozen small business owners about how sales are? Good or bad doesn’t matter. Now ask them why? Brace yourself ’cause you’re not likely going to be hearing empirical evidence. You’ll be hearing the excuses they’ve learned through the years.

“People aren’t buying because the weather has been dreadful.”

“Business is strong because people got their tax refunds.”

What you’re not likely to hear are things like…

“Business is awful because we’ve done a pitiful job of buying what people want.”

“Business is great because we did an excellent job of buying exactly what people want and we managed to negotiate great deals giving us strong profits.”

See how subtle it all is?

Find a place where you can just be done with it. Kick excuse-making to the curb. Divorce yourself from the habit.

Few things are as empowering as realizing that our brains – head trash – stand in the way of our reaching greater heights. We’re the enemy of our own achievements, accomplishments, and performance.

What happens if I own it all? The good, the bad, the ugly, the success and the failure? What does that look like?

Confidence soars. That’s one thing that happens. Increasingly we feel in control. And when we’re not in control we accept the things we do control.

What can I do about this?

It’s not a question, “Can I do anything about this?” What if we accept the fact – the truth – that there is something we can do? Maybe it’ll be the correct thing. Maybe it won’t. But we’re still in control of doing something – whatever we decide to do.

We’re now at the heart of learning, understanding and growing. LUG happens only when we’re able to face the realities that this is our life and we’re fully in control of what happens. Being fully in control doesn’t mean we’re in 100% control of our lives. It means we’re 100% in control of our decisions, behaviors, actions, and choices. What we choose to do with a circumstance that we had no part in is totally on us.

Find pride in accepting and recognizing that a failed outcome was because you got it wrong. But, now – armed with this new data – you’re confident you’re closer to getting it right because you now know more than you did before. Thanks to the failure. It’s one of the biggest things you can do to elevate your confidence, which is the feed your courage needs to move forward.

Contrast that with the shrinking demeanor of a victim constantly in search of sympathy. Stop exhausting others trying to get them to feel bad for you. Stop feeling bad for yourself. It’s better to feel pride in the outcome, knowing you’re working toward success and achievement.

Pride trumps sympathy. As usual, this is largely about how we can put in the work to feel better about ourselves. Self-respect is impossible when you’re a victim. It’s automatic when you’re the commander of your own life.