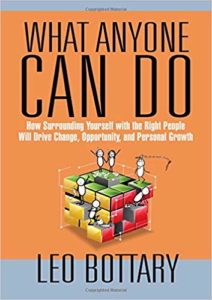 Leo Bottary and I were enjoying lunch and conversation this week. We don’t get to see each other in person very often, the hazards of me living in Texas and him living in California. We do a podcast together – What Anyone Can Do (titled after Leo’s latest book by the same title). Buy a copy here.

Among the many things I enjoy about my friendship with Leo is our diversity. He’s well educated. Me? Not so much. I left college with 18 hours shy of a degree in journalism. Leo has an advanced degree. Leo has spent a lifetime making a variety of connections in all sorts of spaces. Until about a decade ago I spent my entire career with my head down operating retail companies. He’s from Boston. I’m from Ada, Oklahoma. 😀

Coming from two different worlds is beneficial to us. Well, I’ll speak for myself. It’s beneficial to me. Leo provides a perspective that’s often different from my own. It’s not about whether either one of us right. Or wrong. It’s like looking at anything – like a car (I only use that because I know auto manufacturers have websites that allow customers to take virtual tours of cars, inside and out). The view from the back is quite different from the front, which is altogether different than looking at the side, but together – it’s a more complete view. An improved view. 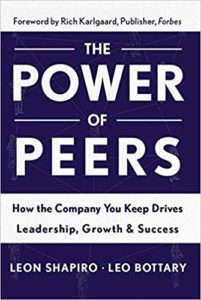 Leo and I were talking about some future plans we have individually and collectively. At some point Leo challenged me to consider an approach that was 180 degrees different than the one I had planned. We talked about it, with me asking him to clarify so I could more fully understand. It made sense to me. I hadn’t considered it before. There’s the power of peers! (Ironically, the title of Leo’s first book, coauthored with Leon Shapiro)

Don’t get hung up on right or wrong. If the only view we have of a car is the rear, it’s neither right nor wrong. It just is.

We walk around to the front and take a very different look. We don’t conclude, we’ll that’s not right. We understand that we’re looking at the same vehicle, just from a different PERSPECTIVE.

Leo and I are both passionate about the same thing — the power of the collective, the truth that who we surround ourselves with matters. We both have a deep belief in the power of others and think it’s one of the most highly under-utilized strategies in every space, including business. It’s a big thing to have in common. But it doesn’t mean we see things, including details, in the same way. We’re committed to sharing and listening though. No judgment. No “you-should-do-this-not-that.” Just deep conversations, insightful questions and an ongoing quest for clarity so the best solutions can be found.

Flipping it around – whatever IT is – isn’t always easy without somebody provoking us. We can improve the practice by intentionally looking at it from the opposite view. But that’s difficult without having others challenge us in a caring way. It’s the old parable of the blind men and the elephant.

A group of blind men heard that a strange animal, called an elephant, had been brought to the town, but none of them were aware of its shape and form. Out of curiosity, they said: “We must inspect and know it by touch, of which we are capable.” So, they sought it out, and when they found it they groped about it. In the case of the first person, whose hand landed on the trunk, said “This being is like a thick snake.” For another one whose hand reached its ear, it seemed like a kind of fan. As for another person, whose hand was upon its leg, said, the elephant is a pillar like a tree-trunk. The blind man who placed his hand upon its side said, “elephant is a wall.” Another who felt its tail, described it as a rope. The last felt its tusk, stating the elephant is that which is hard, smooth and like a spear.

Various lessons stem from that parable, but for our purposes, I’m focused on our need as business owners for deeper understanding, and respect for different perspectives on the same object of observation.

The Peer Advantage by Bula Network is my professional effort (and passion) to serve just 7 business owners with an advantage of being surrounded by people who will do this for one another. I’m assembling 7 high performing, humble, but courageous business owners who understand how critical deeper understanding with the help of others can be to their personal and professional growth. You can find out more by going to ThePeerAdvantage.com. If you own a business anywhere in America please check it out.

Have a great Friday and enjoy your weekend.