Hypotheticals To Help Us Improve Our Business Realities (302) 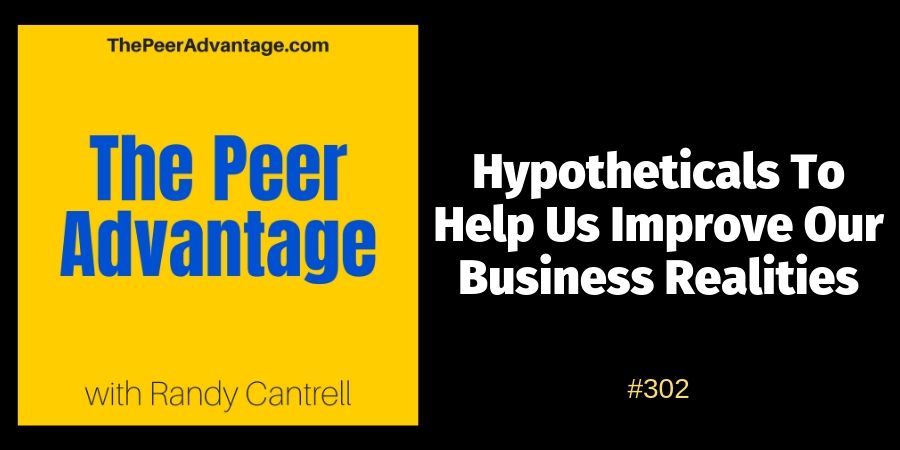 A group of business owners is gathered. They’re from different industries and different markets. But they’re all safe with one another because they share a common existence. They’re business owners. Each well acquainted with the strains, struggles, and joys of running their own enterprise.

This isn’t some good ‘ol boys network club. Fact is, almost half of them are women so they’re not boys at all. It doesn’t matter because each of them is respected by every member of the group. Not just for their similarities, but for their differences.

The discussion is almost always focused on the trifecta of business building: getting new customers, serving existing customers better and not going crazy in the process. Today’s discussion is based on a question posed by one member, the owner of a remodeling company. She’s got a hypothetical question to ask the group. Well, it’s hypothetical for her.

After telling the group how she’s feeling bogged down in too many details, unable to give much consideration to a bigger picture – or look a bit more long-term as she’d like – she’s wondering,

“Should I hire a COO, somebody to help lighten the load, able to take the company to a new level of operational efficiencies?”

She tells the group she’s not taking any actions. Yet. She’s just wondering if it’s something she should more seriously consider. She’s never hired a COO before. Her right-hand person is more of a supervisor of the projects, as she describes him. He’s a talented project manager who has proven skillful at overseeing the various projects. She’s feeling the need to create a more formal organization to bridge the gap between some of her duties and the supervisor’s duties. So here she is thinking aloud with the group – a group of her peers – about what her best course of action might be.

For the next 40 minutes, the group leans into the conversation, asking her specific questions. They’re drilling down into areas to help her figure this out. Nobody is telling her what to do. In fact, at this point, nobody is even making suggestions. They’re working hard to understand – and help her better understand – what she may need.

Some of the questions are easy for her to answer. Others are very difficult. Not because they’re confrontational, but because she’s not considered them before. So she has to think carefully about them. In real-time.

Here’s what brings depth to the discussion. She trusts everybody in the room. They all trust her, too. Everybody is there to grow their business, their leadership, and their lives. They are NOT there to hold hands and sing kumbayah. They’re there to serve one another and to make this group the most effective, powerful business-building endeavor possible.

By the time the discussion moves to possible suggestions – the time when her peers can respectfully suggest she consider one course of action – or another…she’s thinking of a number of critical things she hadn’t thought about earlier.

The group has given her three different suggestions. They’ve shared their own experiences inside their companies. More discussion narrows the suggestions down to two. That’s her decision and the group supports her in kicking one of the suggestions to the curb.

What will she do?

She’ll do what she wants to do and the group will support her. They’ll all tell you the same thing. They don’t want anybody telling them what to do. That’s why they’re business owners. Each will declare they’re happily unemployable. 😉

For the final few minutes, there’s discussion to help her figure out the big question. “What next?”

She tells the group what she’d like to do next. In fact, she commits to about two critical steps to take toward her goal of building in more bandwidth so she can concentrate more on the longer-term vision of the company. She even commits to a faster timeframe that surprised some members of the group.

All the while there are three other members of the group who are thinking through the same thing for themselves. And every member is making an application to their own lives and situations.

This happens in internal groups, too.

A city government has seven directors. Each report to the City Manager. Their responsibilities are quite diverse. From a police chief to a director of economic development. What do they have in common? Quite a lot.

They all work for the same city and the same city manager. They all regularly perform work that impacts another department. When the department of public works needs to do some drainage improvement, the police department needs to be involved in traffic control.

The problem? It’s easy for each department to silo up and declare, “That’s not our job.” By putting them in a room together to have a peer-led discussion, they’re able to more clearly see how their work impacts others, and how they can improve collaboration to improve everybody’s performance.

In one meeting a director poses a hypothetical. “Have any of you thought about changing the role of your deputy directors? My deputies have separate responsibilities and duties based on our traditional hierarchical management. I’m wondering if there might be a better way and I’d like your thoughts.”

What follows is a high-energy creativity fueled conversation. Most of the directors have two deputy directors, but some just have one. Those with one work differently than those with two. Their insights prove helpful and the discussion deepens.

The group considers how changing the role might better serve their departments, the city, and the deputies. They want to elevate engagement and employee retention. They even are forced to face how they may feel threatened by having strong deputies. By the end of the hour, all seven directors confess it’s been one of the most profitable meetings they’ve ever had…all because a hypothetical situation was tossed onto the table.

Sometimes when we think the unthinkable we’re able to reach new heights of achievement. If I’m unable or unwilling to bring up a topic, I’m benefitted by your courage to do so. That’s why we surround ourselves with multiple peers. When I lack courage, others may bring it. When they lack it, I can bring it. It’s the power of the room and our collective ability to serve ourselves by serving each other.