I know of no leadership topic more popular than “employee engagement.” Across every sector leaders give some focus or lip service to it.

Organizations spend extraordinary amounts of money attempting to accurately measure employee engagement. Mostly, I see folks spend stupid money on finding out how engaged (or disengaged) employees are, then play darts trying to figure out if they can improve it. As I’ve watched this, especially for the last 10 years, I’ve been fascinated to see companies neglect doing things, but get very focused on measuring it. Employee engagement isn’t a number. It’s a real thing. A true emotion. A feeling. A way of thinking.

Little Johnny is engaged, but he’s engaged while sitting in the basement eating Doritos and playing Fortnite. Maybe he’s a high performing Fortnite player. It’s not what we’re pursuing as leaders. 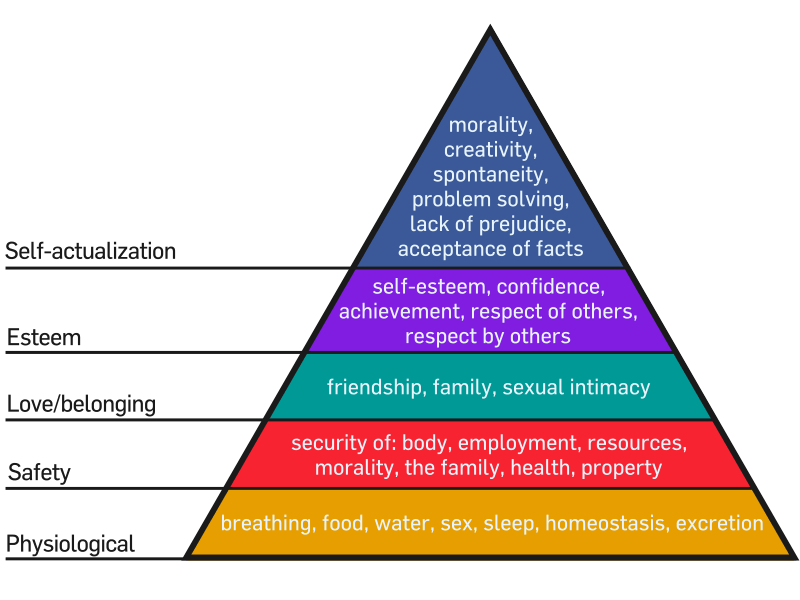 Maslow’s hierarchy of needs is a theory in psychology proposed by Abraham Maslow in his 1943 paper “A Theory of Human Motivation” in Psychological Review. He subsequently extended the idea to include his observations of innate curiosity. There are numerous problems with Maslow’s work and you can research those on your own if you care enough, but I’m using this as a starting place because it’s such a widely used model and many people are somewhat familiar with it. Plus, it does provide one big value – it focuses leaders on what people need. Your leadership may need to be refocused where it most belongs – on the people you’re attempting to lead. Great leaders don’t focus on themselves, except in the context of how they can serve the people they lead.

Changes to the original five-stage model included a modified seven-stage and an eight-stage model developed during the 1960’s and 1970s.

4. Esteem needs- which Maslow classified into two categories: (a) esteem for oneself (dignity, achievement, mastery, independence) and (b) the desire for reputation or respect from others (e.g., status, prestige).

8. Transcendence needs- A person is motivated by values which transcend beyond the personal self (e.g., mystical experiences and certain experiences with nature, aesthetic experiences, sexual experiences, service to others, the pursuit of science, religious faith, etc.).

I tend to boil all this down into a more simple, straightforward approach.

What story are people telling themselves?

This question (and the answers) reveals the important things that directly impact employee engagement. It addresses the issue we all wrestle with. Where do I fit? How free am I? How flexible is my time? What’s my purpose? What’s my mission?  What do I most want to accomplish? Why?

It’s not just a self-centered engagement question. It includes others and the organization as a whole because the story we tell ourselves isn’t told in a vacuum.

How do you help the people you lead tell themselves an accurate story? A story that best serves them as people and as workers? How can you help them construct a story that will make a positive difference in their life and provide the best outcome for the organization?

For starters, you must embrace the notion that what’s best for the individual is best for the organization. Only great leaders believe that’s true. Most don’t.

Here’s the practical reality. Suppose you’ve got an employee who behaves as though he doesn’t want to be where he is. Maybe there’s no place in your organization where he wants to be. For whatever reason, he’s afraid to face reality. He shows up daily, going through the motions, but he’s taking a toll on your organization and on his own life. What’s best for him? Well, I’d argue he’s best served by having to face the realities that he’s miserable and it’s impacting his life and our organization. Everybody is losing. It’s time for everybody to start winning. Sit down with him, help him face the reality, invite him to leave and change his story so he can find what he’s looking for.

Your organization is filled with individuals. One major challenge I see is leaders attempting to lead using poor leadership strategies born from the last century where leaders or bosses told people what to do, and the people dutifully did it. Today, that’s not working. The Age of the Lemmings is over! You don’t honestly want to lead lemmings anyway, so stop acting like it.

Leaders often lament that workers don’t do what they want them to do. That’s not the problem. The problem is leadership is failing to scale the single biggest resource needed by a leader – compassion. Call it caring, love or anything you want, but the truth is, people must know (truly know) that you care about them as individuals. The days of being able to paint with a broad brush and lumping every employee into the same bucket are over. When you’re managing robots you may be able to deploy those strategies, but not with people.

A leader has eleven direct reports. They vary in age from 27 to 63. Some are men, some women. Some are married without kids. Others are married with kids. Some are single. Some have small children at home. Others have grown kids. Still others have high schoolers at home. Some commute almost an hour one way daily. Others live 15 minutes away. Some live downtown in a rented loft. Others are out in the suburbs paying a mortgage. Some drive 10-year-old cars, others are driving the latest BMW.

Are you really shocked that you can’t lead using some one-size-fits-all approach?

As time goes on all these facts will change. The 27-year-old will become 30 and things will change for her. So it will go with everybody else on the CEO’s team. Their lives aren’t static. They don’t live in vacuums and he’s going to have to adapt to the ever-changing lives they live. Their needs and wants are going to change. It’s going to be the job of the CEO to know those changes and properly address them individually with each employee.

Just here folks like to yell about how this doesn’t scale. If you’re hollering that then you’re telling me you don’t think leadership scales because leadership is about leading PEOPLE. And people are individuals, collected into an organization to accomplish work. It’s collective and individual. All at the same time.

We’ll call the 27-year-old employee Karen. Karen is single. She still has college loan debts, especially for graduate school. Today, Karen has a story and those facts are part of her story. They have an impact in what Karen wants from her career. But by the time Karen is 35 she’s married, student loans are paid off and she’s expecting her first child. Now, she and her husband have a mortgage and their first child on the way. Do you think this Karen has a different story? Do you think what’s best for this Karen differs from what was best for the earlier Karen? And we’re talking about what’s best for Karen as Karen sees it PLUS what we (as the leader) feel is best for the organization.

There must be congruency between what Karen is telling herself – and what she most wants in life – and what you require from Karen in the workplace. We’ll continue this tomorrow, but for today I want to leave you with one final fact. You can scale this. You must.

Leadership is without excuse to know every employee on an individual level. Does this mean as the CEO you must scale it? I think you should if you’re able. For the small business owner or the leader of a small team, you’re without excuse. If you’re operating a 10,000 person global enterprise, it’s impossible for YOU to do it, but it’s not impossible for your leadership team to have intimate knowledge of every single person under their leadership. I’d argue that’s job 1 for each of them. If not, why not? What’s more important for leaders than leading? Nothing!