Deb Calvert named her company People First Productivity Solutions. Angela Maiers centers her work in education and business around the premise that you matter. No matter who you are. Claude Silver is the Chief Heart Officer at VaynerMedia, a title she crafted to replace what most folks would call “HR.” Three highly successful female achievers who all realize the power and importance of PEOPLE.

Yes, there are some guys who feel the same way. Tim Sanders, best selling author of Love Is The Killer App does. Stanford professor (and one of my favorite business authors) Bob Sutton does, too. And so does another favorite author, Dr. Henry Cloud.

Two themes emerge in most conversations with leaders. It doesn’t matter if they’re in the business world, non-profit world, local government world, scientific world or creative world. The themes are CULTURE and COMMUNICATION.

Bula Network, my company, is intently focused on 3 C’s – Connection, Communication, and Collaboration. They each contribute in some powerful way to a 4th C, Culture.

And at the heart of it all are PEOPLE. Famed TV turnaround artist (The Profit), Marcus Lemonis concentrates on three things in each episode: people, process, and product. He puts people first in that list for a reason.

There’s compelling evidence to prove that people make the single biggest difference. Bill Gurley is the number 1 venture capitalist according to CBInsights’ latest research. Like most, if not all, successful VC’s, Gurley knows the smart money invests in the founder. Here’s a Tweet he sent out last week about Zack Urlocker, a leader who has helped lead Active Software, MySQL, Zendesk and most recently Duo Security to billion dollar exits. As Gurley’s Tweet says about Urlocker, “One time might be luck. This feels like all skill.” 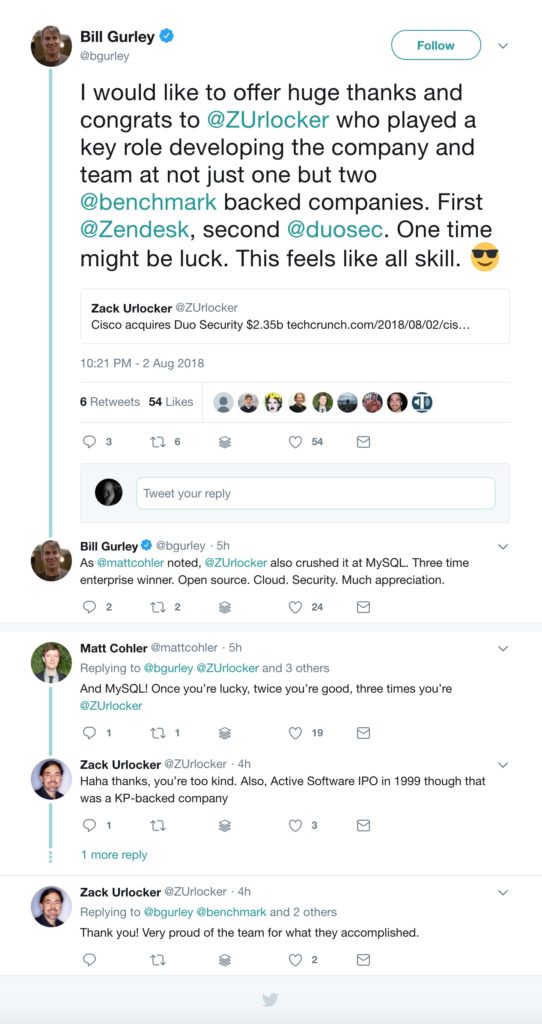 Hopefully, by now I’ve amply demonstrated how powerful, impactful and necessary PEOPLE are making great things happen. Yet still too many business leaders, owners and CEO’s practice quiet (sometimes, not so quiet) resentment toward people.

I’ve read more than my share of leadership books by the likes of Jim Kouzes and Barry Posner, authors of The Leadership Challenge. Few authors have written more, or better about the topic. Bright minds like these have contributed to forming my almost-lifelong belief that…

We manage the work. We lead the people.

Why then are so many business and organizational leaders trying to manage the people?

I don’t really care why. It’s just wrongheaded. Some may not know better. Others know full well how they’re acting. And don’t care. It boils down to ego, control, and fear. That’s my intuition about it. I could be wrong. I doubt it.

Leaders can be tempted to resent the success or failure of people in their organizations. They may resent the financial investment necessary to get and retain people with top-tier abilities. One reason I fell in love with sales (commission-based sales) as a young age is that it was apparent to me that it was an endeavor where a person could earn what they’re worth. If you performed well, you could earn more than if you didn’t perform well. Don’t resent people earning what they’re worth.

They may resent the credit other people earn. Right here in Dallas, Texas, there’s a brilliant business person, Dallas Cowboys’ owner Jerry Jones, who is publicly notorious for wanting most of the credit, but in the view of some, not nearly enough blame. I don’t know him so it’s unfair to claim they’re right, but I’m empathetic to their view. Jerry is very public about his importance. And I bring him up because some leaders who practice resentment already have brought him up to me. Jerry Jones is approaching a net worth of $6 Billion. In a sport where success is measured in Super Bowls, his teams have won 3, the last one in 1996. The team hasn’t been all that successful in the last 20 years. I might argue (and I have) that Jones may have achieved greater financial and on-the-field success by curbing some of that arrogance and pride.

In all the words that have been published, and spoken and all the research that’s been done on LEADERSHIP, nobody has yet to list resentment as an effective trait. For good reason. It leads to jealousy, bitterness and often hatred. Much of the time the focal point of it is PEOPLE. And for top leaders, most often people very important to the operation.

Conflict and debate can be good things fostering creative solution. Innovation is a by-product of positive, vigorous debate. But resentment fosters strife. It breeds contempt. Those are not forces for good. Much less greatness.

You can do two things to help yourself and your organization when it comes to managing your own resentment of others. Don’t resent failure. Instead, be determined to serve in ways to turn it around to success IF YOU CAN. It’s not always possible. Sometimes people just don’t fit. Or perform as well as we need them to. Your job is to provide them the best opportunity to perform at their highest levels. Hire well. Fire only after you’ve exhausted doing your part.

Don’t resent success. Celebrate it. Understand you are the chief recipient of it. Any and all success of the people inside your organization is your success. Nurture more of it. From everybody and anybody. Make success the habit of everybody in the company. Take pride in knowing the part you played, but take bigger pride in knowing these people did it as part of your team.

When you feel tempted to practice resentment toward somebody else, particularly somebody with whom you work, ask yourself, “Why am I feeling this way toward them?” It’s going to boil down to you resenting their failure or their success. Handle it accordingly, but appropriately. Lead people. Manage the work.