These days scaling is all the rage. And talk. Start-up’s focus on scaling as quickly as possible as they struggle to escape the gravitational pull of business failure. When we’re not trying to scale, then we’re trying to hack, implement something lean, strategize something agile and all the while we’re honing our storytelling chops.

Earlier this week I had a very brief Twitter exchange with Tom Peters. He mentioned how storytelling could be used for bad and said he gets nervous when he sees storytelling consultants. He hates when the word “agile” is capitalized. And he’d hate the word “storytelling” if he ever saw it capitalized. Poking a bit of fun, I replied, “So Agile Storytelling would (be) anathema (smile) — I’m with you on both counts btw.” 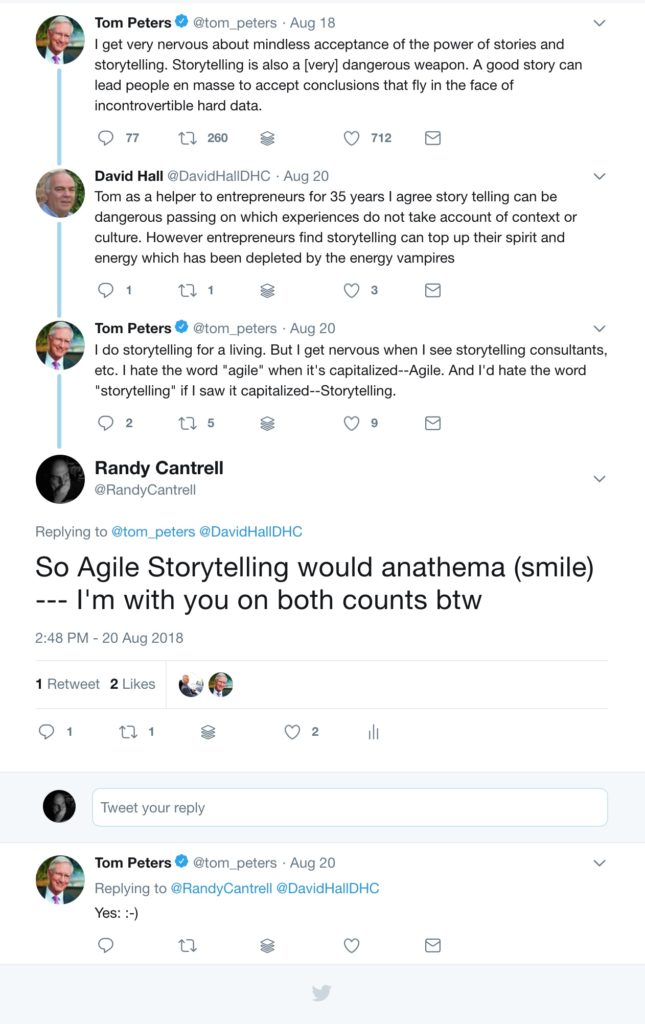 Buzzwords and buzz activities abound. I’d apologize, but I’m not sorry for getting tickled at it all. People love it because it makes them sound smarter. And some people need all the help they can get to sound smarter.

Meanwhile, we’re busy trying to make payroll, put out fires and increase sales. “Agility? I’ve got your agility. I go to the gym and workout every day. And I’m old, but I’m still agile. I do need to improve on that lean business though.” 😀

Today it’s about communication. I’m not talking about information you may need to broadcast to your employees, or team members. That’s a one-way street. Sometimes one-way streets are effective. Lots of cars can move in a single direction if the street is only open to one way. More than if we allowed cars to move both ways. But what a pain it’d be if every street were one-way. I suspect we’d be going in lots of circles to get to where we needed to go.

But there are times when a written or spoken message needs to be communicated (broadcast). We need to pass information on to the people who need it. That’s already scalable. We write and distribute emails, memos, presentations, videos, web sessions, text blasts and whatever else can get the job done efficiently and effectively. It may be helpful to consider ways to improve that – largely, tone and the way we convey the message could likely be improved – but that’s not what I’m talking about today.

We make this seem like it’s not worthwhile, and that it’s too cumbersome. Truth is, it’s neither. It’s highly profitable and easy to do. You just have to make up your mind (or perhaps change your mind about it).

Some owners and leaders don’t think it’s worthwhile because they don’t think some people have anything of value to offer in conversation. Nobody will say that in a crowd, but they’ll feel it and think it. If you think the class system is gone, go visit the blue collar workers and you’ll find out different. Those boys in the top floor who wear those French cuffs aren’t found roaming the factory or warehouse floor, except when they’re showing the place off to a visitor. Besides, that guy making $12 an hour has no clue how to operate a business. Right?

WAY too many owners behave that way. I don’t care if they give it good lip service. Judge their actions. Judge your own actions. When you look around your operation and you feel some citizens in your kingdom are lesser people, you’ve got a blind spot that needs to be eliminated. And don’t try to convince anybody that blind spots are good things.

Listening. Really listening. That’s the point. And the goal.

Too many owners and leaders feel like listening means conceding decisions. Others are afraid of having to explain something or defend something. So they avoid the conversations altogether, or they enter the conversations with their guard up. Which is likely how they behave much of the time. Not open. Hardly ever honest. Never transparent. Always on guard. That behavior cripples communication, which cripples leadership.

I get that not everybody in your organization has the same degree of skill, expertise, knowledge or ability. But scaling communication from a leadership perspective starts with how you feel about other people. It’s steeped in what you believe about people. If you believe that because you make more money, or wear fancier clothes, or have an important title — then you’re sense of everything is more valuable than the viewpoint of anybody else, then you’re doomed already. You’re just too stupid to know the game is already over.

Consider a guy working on a manufacturing factory floor. He’s got a job that may involve one step of an 18-step process. Question: is there likely anybody else who knows more about that part of the process? If I’m the CEO of that company, I’m putting my money on that guy. I’m betting he knows his step better than anybody else in the place. To think otherwise is the epitome of a closed mind.

First, I have to see value in having a conversation with him. Second, I have to lower my guard, be candid and listen. Really listen. Third, I’m going to make it easy for him. I’m not going to talk with him to see how he feels about our new business development strategy. I’m leaning on him for his expertise in the area where he clearly knows more than me, and likely everybody else in the joint. That doesn’t mean I restrict what I allow him to share with me. It means I acknowledge his area of expertise and let the conversation go from there.

When I respect him, I don’t get defensive. I don’t dig in. I understand the context of the conversation, whatever it may be. I can communicate with him to get his feedback, to see how he’s doing, to find out what I can do to better serve him (and make his work better, etc.), to give him feedback that can help him do better…there are many reasons I can engage in a conversation with him. Each of them share one thing: serving him. Don’t serve him for any reason other than because it’s right. It’s who you are!

Do it and coach your leadership team how to do it, too. Show them the way. Share with them the value of it. Hire for this trait. I challenge you to hire people – leaders – are find value in the opinions, insights and ideas of others. Hire the smartest guy in the room at your peril. Hire the person capable of making the room come alive with ideas and creativity, and you’ll have found a key person.

The Interaction Among Others

Do you foster ways for people in one department to encounter people of another department? Or are the folks inside your organization siloed off among only themselves day after day?

Get creative in finding ways to make new interactions happen. Use your imagination. The priority has to be safety. Security. People have to feel confident that there’s not some underlying thing going on that they’re not privy to. Again, your openness and honesty is key.

Emphasize the value of shared ideas. Tell everybody – and show everybody – how much you value creative, innovative conversations and ideas. Here’s an idea, ask people what they think about intentionally fostering conversations among people who otherwise don’t talk. Or don’t talk very much.

The price of unscaled communication is insanely high. You’ve heard that old story of the daughter who would cut the ends off the ham before cooking it because that’s how mom did it. Only years later did the daughter learn, when prompted to ask her mom, “Mom, why did you always cut the ends off the ham?” – that mom did it because he had a narrow pan and the whole ham wouldn’t fit. Rather than get a bigger pan, mom just made the ham fit. Think of all the wasted ham over the years that might have been saved if they’d just had the conversation.

What about the conversations inside your company? How much ham are you wasting? Stop it.