The Answer To “What’s Important?” Is The Name Of Somebody You Love (332) 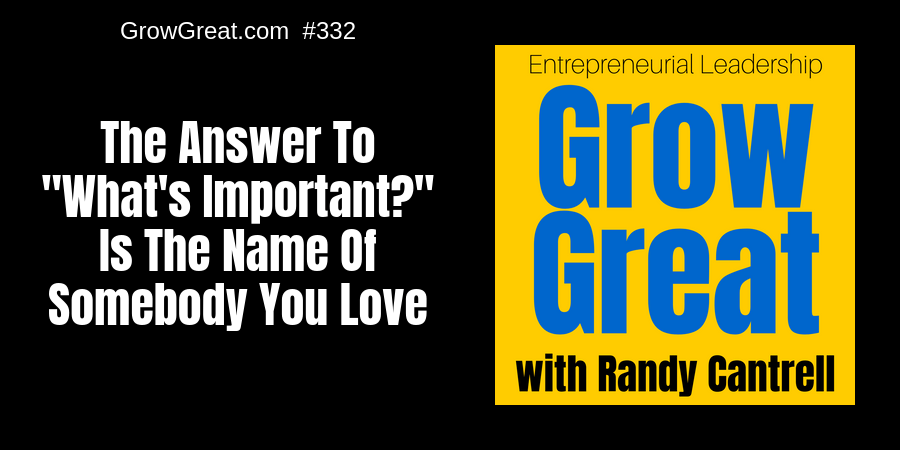 The answer can vary from hour to hour. Sometimes, minute to minute.

But that’s business. And while it can consume our life, it’s not our life. Not really.

I missed recording a show Monday because life got in the way. It happens. It’s happened to you. It happens to everybody.

Matt Kearney is a singer/songwriter in Nashville. Some years ago he wrote a song that contains a lyric, “I guess we’re all one phone call from our knees.” If you’ve ever received such a call, you know.

Over the weekend I was watching a documentary about the voicemails and phone calls made from the poor people trapped inside the World Trade Center towers on 9/11. A number of survivors shared their stories and recordings of their family members. It was heart-wrenching to hear these people talk about the value of a 5-second voicemail message left on a machine. These people – each of them with a very important name to their family and friends – gave their families a gift. The gift of being able to remember what they sounded like. As one survivor said, “I was told that after awhile you forget the sound of their voice.” She’s got a recording to remind her.

You do what you do largely for yourself. I know we chase and pursue because we love it. Or we love certain things about it.

But I also know we do it for somebody other than ourselves. At least I suspect most of us do.

In recent years I’ve thought increasingly more and more about inner circles – those people who matter the most. I suspect most of us have a relatively small inner circle. We care about a number of people, but our lives are most impacted by a far fewer number of people.

Look around your life. See if that’s not so.

I’m optimistic that we can enlarge our circle because love isn’t all the same. There are different types of love. Different levels of love.

The Matt Kearney song with that lyric is entitled, Closer To Love. There’s the rub.

The list of names you’re thinking of right now. The people who matter most to you. However long or short that list may be – those are the things that matter to you.

If you had been trapped inside one of those towers on 9/11 you wouldn’t likely call your second in command (no offense to him or her) to review some pressing business concern. Who would you call?

Some of the people appearing in the documentary showed phone company records – the calls made by their deceased loved one. They called more than one person. Some were able to contact family and friends. It was evident that the number one thing on their minds was contacting the people they loved the most.

They wanted to say a few things.

Many expressed concerns for children. “Tell the kids I love them. Take good care of them.”

As I watched I thought of who I might call and it’s a very short list of “must call” people. But it’s short for you, too.

That sounds like I’m downplaying the role people serve in our life, but I’m really going in the opposite direction. The people who matter most can be expanded with increased intentionality. And that intention is based largely on something different than you’re thinking.

Who do we matter to? Who do we serve? Who might be impacted by our absence?

Some grow increasingly focused on who can help them. I’m thinking of how we might expand the number of people we’re able to help. That subject is complicated. Mostly because we’re skittish on being helped. Largely because the kind of help people want to provide is harsh judgment and telling us what we should do. That ain’t the kind of help we need. Or want.

Watching and listening to these 9/11 stories reinforced what I already knew to be true. The phone calls were made to the people who mattered most to the victims. They were people who they knew loved them. People who had their best interests at heart. People with whom they felt a deep, strong connection.

How can we live so we’re that person for others?

Who would call you in the face of inescapable death? Why would they call you?

For the same reason these people called. Because you were important to them. Because you mattered more than others in their life.

Now flip it around. Who would YOU call?

Don’t put off doing what needs to be done.

THE reason you do all this – chasing all these sales, focusing on increasing profits, trying like crazy to grow this business – is because there are people who matter.  Let them know how much they matter. Today.