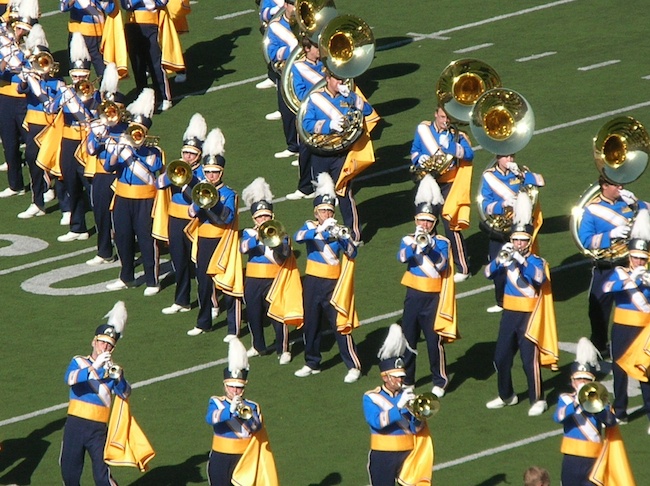 While the crowd is entertained, we're in the locker room preparing for the 2nd half. While the crowd is entertained, we’re in the locker room preparing for the 2nd half.

It’s time to jog into the locker room and prepare for the second half of 2014. Meanwhile, the band hits the field and the twirlers prance around to entertain the folks in the stands.

You and me, we get no entertainment ’cause we’re playing in the game. While others are grabbing hot dogs and soft drinks, we’re busy reviewing what worked and what didn’t work in the first half.

Into the locker room we go. We remove our shoes, grab a towel and a Gatorade bottle and take our seat. The coach will be in here shortly and let us know what the plan is for the rest of the game.

After spending time with the other coaches, the head coach enters the room, grabs a whiteboard marker and begins.

He starts off barking about the things he knows we know how to do…but failed to do in the first half. It’s our neglect. He’s blasting us and we hang our head ’cause we know he’s right. There were lots of things we didn’t do because of our neglect. It wasn’t a lack of knowledge, or even practice. We were just too lazy to give it the effort it deserved. And it cost us. Our opponent took advantage of us. They outworked us. The coach is right.

The coach is specific. He even calls us out by name. It’s not personal. It’s individual. We’re responsible and he’s holding us accountable. We’ve let the team down. Again, the coach is right.

The coach starts focusing on the things we did well in the first half. He points out the success we had and why. He’s telling us to build on that. It’s evidence, he says, of the things we can do that our opponent can’t handle. He urges us to turn up the intensity in those areas.

He ends the halftime speech by telling us how we’re going to win this game. The strategy seems pretty clear. We’re going to do those things we’ve done in practice dozens of times. We know how to do them. He’s not telling us to rely on something brand new that we’ve never done – or some tactics we don’t know. Everything he’s telling us are things we know very well.

The coach diagrams a few things on the whiteboard to remind us of where to be, and when to be there. It’s all position and timing, things we’ve gone over and over again. It gives us visual evidence again of our responsibilities.

Our shoes are back on. We’re all ready to leave the locker room. It’s just about time to start the second half.

The coach has us huddle in close and he tells us in a loud, but calm tone…

Do what you know. Be responsible. Be accountable. Outwork your opponent. Refuse to lose!

He and the coaches leave the locker room. We’ve got seconds before heading out. Now all the players, still in the huddle are led by our captain who yells, “Refuse to lose on 3. One, two, three!” In unison, our team yells at the top our lungs, “Refuse to lose!”

It’s time to hit the field again. We’ve got another half to play!