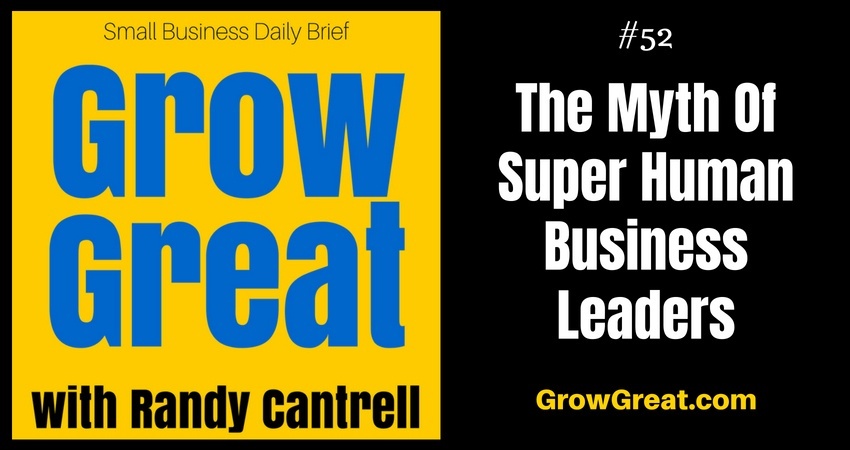 Daily I see headlines (click bait) and posts declaring why high achievers aren’t like the rest of us. I don’t argue that high achiever, of whom I like I think I’m sometimes among, behave differently in some important, but perhaps subtle ways. But there are so many myths being foisted on us daily I felt compelled today to help you avoid feeling pressure to be somebody or something you’re not.

We’re all prone to read headlines, but sometimes the content isn’t any better than the headline. We’re swamped with mythical facts.

You get the drift. You see the same headlines and articles I do.

If we’re to believe the truths of all these we’d quickly find many of them are contradictory. Proving they can’t all be accurate. 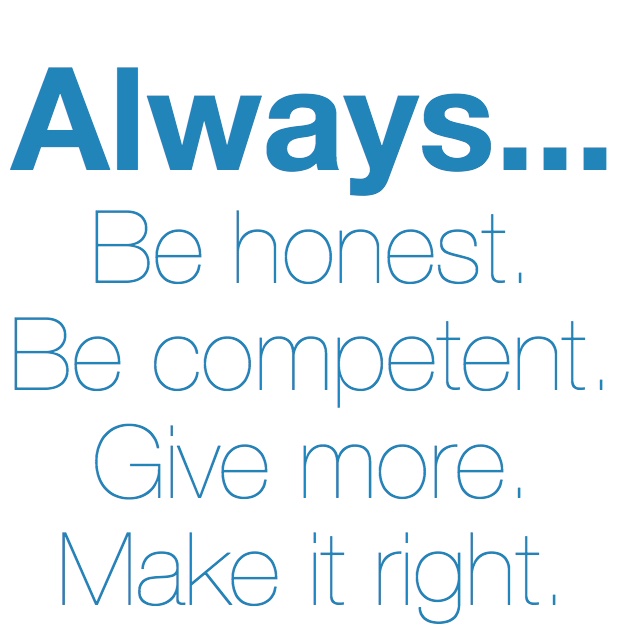 But I’m not naive. I’ve known business owners who don’t care one thing about that first line, “Be honest.” While I’d love to make a declaration that dishonesty doesn’t pay, but it does. Crime alone proves it does. The illicit drug business is proof. The last comprehensive study done on the scope of the drug trade may have been done in 2003, when it was estimated that the drug trade is $320 billion annually. That was fifteen years ago! There have been some interesting data collected on the global drug trade, but suffice to say – it’s ginormous! And it’s anything but honest.

Here in north central Texas, we have roofing companies that descend like locusts when a hail storm moves through. Texas doesn’t require any certifications for roofing companies so any hack with a pickup truck can pose as one. Some are grossly incompetent. Others aren’t honest. So much for my second line, “Always be competent.”

As for giving more and making it right, well, you’ve encountered numerous customer experiences yourself to know how untrue that often is. My business philosophy is how I choose to do business. It’s my view of the world, or how it should be. But it’s not the only way of doing business. I happen to think it’s the right way.

I know CEO’s who are staunch to do list people. They make lists and more lists. They’re high achievers who wouldn’t imagine doing business without a written list of what they need to accomplish. And I know other CEO’s, equally successful, who don’t write down anything. Tethering them to a to-do list would never work.

Some CEO’s are outgoing, high energy and loud. Others are shy, downright bashful, introverted and so soft-spoken you have to lean forward to catch what they say. Both ilks can and often do achieve insane success.

There just isn’t one way to climb the pinnacle of success or high achievement. Find somebody who does it one way, and I’ll find somebody doing it completely the opposite.

So what’s the point?

The point is my encounter with some business owners who feel the pressure to comply and fit the mold. What with all the preaching about how it’s done I fear some business owners don’t embrace the value of forging their own path. It comes home to you when a business owner who tells you she’s not a morning person, and never has been, but she’s read so many things about early morning risers and success. She’s trying to get up at 5:30am and it’s not working out for her at all. I ask, “Why?” (as you know my favorite question)

She doesn’t know. She thinks it’s something she should adopt and incorporate into her life. She fears if she doesn’t do it now, she’ll never be able to. “And what will you be missing?” I ask. She doesn’t know, but she’s fearful she’ll be missing something. I’ve seen this a lot over the past decade – people fooled by productivity hacks that are anything but productive for the way they need to live their life.

One size doesn’t fit all.

If you want to try something – some FACT – then fine. But stop putting pressure on yourself to adjust to some mythical truth, thinking it’ll provide some simpler path toward higher performance.

Just this week a friend Tweeted an article from Forbe’s (a very credible source), 7 Things Wildly Successful People Do Before 7:30 a.m. I clicked it when he Tweeted it and got to the first thing and thought, “Well, so much for my success!” Number 1 was “they drink lemon water.” Lemon water? Lemonade maybe. How about Dr. Pepper I thought? The good news is I pretty much do the others quite regularly. Guess I need to jump on that lemon water. It’s likely the missing ingredient to my being WILDLY successful. Who knew?

Some people have had careers that were sorta linear. Others whose careers have taken dozens of left turns followed by many right turns. And we’ve all encountered our share of speed bumps, potholes, and roadblocks along the way. Not a superhuman among us!

Here’s the good news. Your success doesn’t hinge on you being superhuman. More often than not, they more likely hinge on you being HUMAN. But that’s admittedly my bias. I think people matter. Further proof that there’s more than one way to do things…I know some very tyrannical, people-don’t-matter business owners who do quite well.

Do YOU. Be YOU. Yes, give it the effort to be the best version of YOU. Yes, try some new things. But stop putting pressure on yourself to adopt every strategy, tactic or hack you read about. The media will continue to spew forth platitudes of what it takes to succeed. You and I both already know the biggest part of it is determination and pushing through. As business owners and leaders, we’ve got enough obstacles to overcome without the distractions of thinking we’ve got to measure up to some list of traits imposed on us as “truths” or “facts.”

Craft your own truths. Do what works for you. Follow your convictions, your heart, and your effectiveness.