Psychological Safety. That’s the common label for the kind of safety we’re speaking of today. Of course, physical safety is equally paramount. Even in the brutal training of military special forces, safety during the training is stressed. Participants may feel as though they’re going to die as they push to never-before-experienced extremes. But there’s an implicit sense that those around them won’t let them fail to the point of serious injury or death…in spite of the fact that accidents do sometimes happen. Ditto for people in the workplace. Employees must be provided a safe environment in which to perform. Else, they’re going to be fearful and unable to perform. Unless, of course, they’re professional athletes – or police officers, or firefighters, or soldiers, or any number of other occupations that have inherent and obvious risks!

Psychological safety is the belief that you won’t be punished or humiliated for speaking up with ideas, questions, concerns, or mistakes.

This explains why sometimes people don’t do anything. Or say anything. Too often apathy isn’t the result of anything more than people enduring ongoing discouragement…becoming less and less safe. It’s easier to stand still and do nothing – even if that results in some chastisement. The devil you know is better than the one you don’t. Why do something and risk an unfamiliar chastisement?

Frontline workers are often silenced because of fear and the reality that nobody wants to hear what they have to say anyway. So why bother?

The group doesn’t trust the guy who is trying to assume leadership. He desperately wants to be in charge, but nobody trusts him – except to be self-serving.

People won’t be honest. Instead, they’ll be nice.

Kindness isn’t the same as being nice.

Friends and even enemies will often be nice. It’s not helpful, but they’ll be nice.

Nice is telling you how sorry they are you’re experiencing something difficult. “I’m so sorry you’re going through that,” they’ll say. Question? Is that helpful? Other than knowing somebody feels sorry for you, it’s not terribly helpful.

Kind is different. “I’m sorry you’re having such a tough time. What actions are you thinking of taking to move forward?” It’s not hateful, but it might be helpful…provoking them to think about and articulate what they might be able to do to improve things. Especially if the conversation continues with valuable back and forth…in a judgment-free zone with a clear emphasis on simply helping the person figure it out.

No dog in the hunt. Unselfish motives.

It’s hard to get. Selflessness in people willing and able to help us without trying to live our lives for us. People whose only vested interest is our very best! 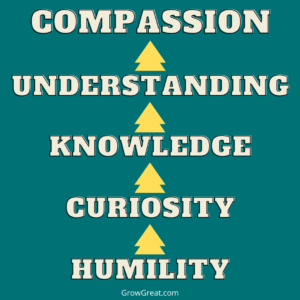 Human capacity to work for one another. With one another. It’s extraordinarily high value. And too frequently hard to find and to accomplish. Because we get in the way. In a word, it’s pride that ruins things.

Years ago, as I observed people (mostly men) who clamored to be in charge, to be the boss, to be the one making the decisions, I watched the destruction of their careers, groups to which they belonged, teams of which they were a member and organizations where they operated. I observed the carnage created by their ego and pride.

The height of the progression is compassion. It seems to me that without compassion – or at least the prospect of it – we can’t experience trust. The kind of trust we need to feel and know we’re safe.

Trust. Our individual and collective desire to know that what we say and do won’t be held against us forever. We want to know that even if we do manage our way into the doghouse – that is, we’re accountable for our own foolishness and stupidity – BUT, we trust others to let us figure out a way out of the doghouse. Best yet, we know others will help us get out of the doghouse and move forward.

In contrast, most of us know too well how many people surround us who are anxious for us to fail. Hungry for us to get it wrong. Even excited if we’re in the doghouse. Others can figure out why. I have my theories, but they’re all boiled down to pride — the enemy of humility.

High-performance is fueled by safety, not fear.

High-performance is fostered by knowing somebody has our back, versus somebody with a knife aimed at our back.

High-performance is manifested in groups of people capable of discussion, debate, and disagreement because they seek the ideal outcome individually and collectively.

Every time I’ve seen a dysfunctional or ineffective or inefficient group, team or organization I’ve seen blatant disrespect. Some or all lack trust. They certainly don’t value one another. Instead, they’re quick to judge, even quicker to assume the worst and rely on contentions to express themselves.

It’s corny perhaps, but true for groups and teams…

If my end of the boat sinks, so does yours.

Foolish people don’t think so. So they continue to listen to their pride, making everything about them. Their eagerness to put themselves forward is obvious to others. Safety, if it ever existed, erodes. Conflict often follows because pride fosters pride. “If he’s gonna try to take charge, then I’m going to fight to be in charge.”

Dejection results. Apathy soon creeps in or sweeps in. People give up. They give in. All the creativity, innovation, input, and communication stops. We shut down. We bailout. We disengage. Our ideal short-term option, in such circumstances, is to endure until we can move on. For some, getting way fast is the option. Good people are lost. Potentially good people are stymied, hindered from making the progress they desire.

Tactics don’t work. They might appear to help, but they won’t stick because they’re tactical rather than being genuine.

What matters is humility and concern. People must care. About others and about the group, team, and organization.

The hard part is influencing people to care. How can you help somebody care who doesn’t? I only know to put forth compelling reasons – arguments – that prove the value of caring. But like most things, caring is a choice. Some choose not to care. Except about themselves. I wish I could tell you I’ve discovered ways to convert such people, but I haven’t. Mostly, I’ve found it most valuable to part ways with such people. Get them off the team, out of the group or remove yourself opting to find a more suitable environment for high performance.

So I encourage you if you hold authority, or a position, or a title that makes you “the boss,” tread carefully with your authority. Step up to the leadership call knowing that being the boss and being the leadership are very different things. We may not choose our boss, we all choose who we’ll follow. We follow the people who help us feel safe. Those who make us feel safe enough to follow them, to strive to be more, to express our view of what needs to happen to improve things. Leaders who help us realize that we have an integral part to play make us feel respected, heard, seen, and valued. Bosses who impose their will at every turn discount us, tread on our dignity and weaken our confidence in them, the organization and if we’re not careful…ourselves.

To every leader I’ve ever coached I repeat a few foundational truths. Chief among them is this one.

It’s not about you. It’s about them!

Ideal leadership is selfless. It’s focused on doing whatever must be done – whatever can be done – to serve those who are looking at us to show them the way. In a single word, it’s SERVICE. Without “self” preceding the term.