Day 27. Four more sessions including today and then we’re have completed our 30-Day Micro Leadership Course, a series of about 5 hours of real-world leadership coaching. You’re doing the work. I’m only here to help spur you on to do the work by showing you a few things you may not have considered, by sharing some insights that might be helpful, and by giving you some concepts that might help you move forward in your own leadership journey. Thank you for being part of this 30-day journey.

That means you have to have great, accurate information. Data. Intel. Analysis. Measurements. Great leaders embrace knowing the numbers, the facts, and other data that can help make better decisions. After all, the daily work of a leader is communicating and making a series of decisions. Usually, the decisions aren’t “bet the farm” magnitude, but the higher up you go, the more critical the decisions become. The CEO can make a decision that can have an enormous negative or positive impact. The staff supervisor can make a decision that will move the needle, but the repercussions will be much smaller than those made by the CEO.

I must reiterate the progression of leadership because these ingredients matter. Greatly. Especially that foundational ingredient, humility. It’s not just an honorable character trait. It’s practical. Without it, you’ll be robbed of seeing things more clearly and accurately.

Who wants to go bowling when you can’t see the pins? You have no idea how many pins you knocked down. You hear the ball rolling down the lane. You hear pins fall. But you can’t see anything. No way to properly measure your success or failure. Nobody would sign up for such a game. The fun of bowling isn’t merely the act of tossing the ball down the lane. It’s in the work of trying to knock down as many pins in a single throw as possible.

Why then do you think your team or organization should perform at a high level when nobody can keep score? Lots of people are disengaged because they can’t see how or if they’re making any difference.

Measurements – keeping score – is important so you can objectively know if you’re making progress. Feeling good about yourself isn’t an accurate measurement. Those annual performance reviews tend to not be performance-based at all, but rather how somebody feels. Those feelings may be based on something, but often the basis isn’t something very quantifiable.

What is quantifiable in your organization? Likely anything and everything. Does it mean everything is important? Not necessarily. You must be careful to connect the dots. Perhaps you have to be even more careful not to connect other dots that don’t belong together.

The other day I heard somebody talking about how many Native American tribes were prospering because of casinos. One particular tribe comprised of about 400 members was prospering so much that tribe members were each paid over $80,000 monthly. Unemployment was over 99% because nobody needed to work. The slim percentage of people who did work, I’d assume did so because they wanted to – not because they needed to. Not knowing all the facts, some economist or expert could look at this particular tribe with 99% unemployment and conclude, “We need to help this tribe. Hardly any of them have jobs.” But by knowing and understanding the context, you realize unemployment in this community is not a problem, so far as earning money is concerned.

Leaders can make erroneous conclusions, too. We can all get it wrong if we lack the humility to see real answers, accurate data, and even more accurate conclusions.

From the number of incoming phone calls to inventory turnover ratios to customer acquisition costs – we can measure just about anything and everything today, thanks to computing power. Don’t be afraid to measure. People daily ignore going to the doctor even they “know” something isn’t right. Incorrectly thinking “what I don’t know won’t hurt me” can prove fatal if we have something seriously wrong.

Ignorance is not bliss. Know your numbers. 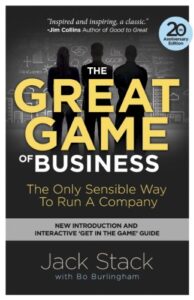 Great leaders don’t fall into the trap of tracking only the key numbers indicative of their industry. They look to track things few others are willing to track. Seeking the competitive edge others may be unaware of, high-performance leaders push to figure out ways to gain the slightest edge for their organization and the people doing the work. And the workforce responds to the scoreboard. If you don’t think so I urge you to read The Great Game Of Business by Jack Stack of Springfield Remanufacturing.

Employees can understand business. They can understand the numbers and how they matter. Great leaders show them. Teach them. Inspire them. And help them see how performance can be improved.

What are you measuring?

What are you failing to measure?

In order to know where you’re going and how to get there, you must first know where you are. That’s why the measurements matter. They’re the starting point of your GPS, without which you can’t possibly compute a route to the future.

Share that information with the organization. Information isn’t to be hoarded. Don’t ask your employees to bowl in the dark. “And enjoy it.”