Are you superstitious? You believe stuff just because?

Today is a great day to take an inventory and re-evaluate your superstitions if you have any. I’ll tell you why it’s important — because you’ve got some assumptions, too. They’re not classified as superstitions, but they’re just as dangerous. Or more so. 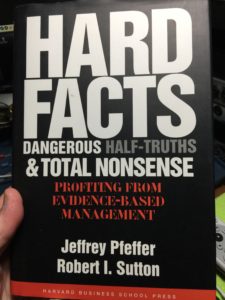 Some years ago (March 2006) a couple of my favorite business authors – Jeffrey Pfeffer and Robert Sutton – wrote a book entitled, “HARD FACTS, DANGEROUS HALF-TRUTHS AND TOTAL NONSENSE: Profiting from Evidence-Based Management.” Most of us claim to be fond of evidence-based management and leadership. And we claim to practice it. But do we really?

Sometimes our assumptions, like superstitions, are formed without merit. I’m sure way back somewhere there was some reason for them. We’ve probably long forgotten about what it was. We just wrapped our arms around it, adopted it and have been living with it close to our heart ever since.

Superstitions are defined as “widely held but unjustified beliefs in supernatural causation leading to certain consequences of an action or event, or a practice based on such beliefs.” Synonyms would be myths, delusions or illusions. What CEO or business owner wants to admit they embrace any of those? None of us. But we’ll all have to admit – if we’re honest – that we hold assumptions. The problem is some of our assumptions are better classified as myths, delusions or illusions.

It’s not all bad.

All of us operate from some base of assumptions. I don’t know what yours are so I’ll share a few of mine.

I assume that most people want to do good work. And that they’re honest. I realized many years ago while operating luxury retailing companies that I had an obligation to employees to remove (as much as possible) the temptation to steal from the company. Even honest people can succumb to the temptation if it’s easy. So I always put systems in place to make it hard. Dishonest people who want to steal will find a way. I focused on helping good people remain good.

I assume that we’re living in the greatest era the planet has ever known. The advantages we have are downright extraordinary. In every area of our life.

I’ve got business friends and acquaintances who don’t share those assumptions. They assume people won’t do good work without lots of micromanagement. And that things are pretty dreadful, and growing increasingly worse.

Here’s the things about these assumptions. They’re our beliefs. That means they fuel our behaviors and actions. As a result, daily we prove them to be true. I prove mine. You prove yours.

It doesn’t matter if they’re total nonsense to somebody else. Or if they’re half-truths, or even completely untrue. That word Pfeffer and Sutton used is important – dangerous. They can be, and often are — dangerous.

Here on Friday the 13th let’s challenge our assumptions. Let’s do it from a drone point of view rather than getting down in the weeds or the details. We’ll just look at them from 2 points of view: optimism or pessimism and fully accountable or excuse-making.

Which is it going to be? Optimism or pessimism?

Look at your assumptions through this lens. Determine which one fits. Then ask yourself if that lens – that viewpoint – helps you grow great, or if it hinders you.

The hard part is knowing when or if we’re deluded. I’m not a neuroscientist, but I’ve long been fascinated with the power of our mind. I’ve read plenty and continue to study it as a bit of a hobby project. To help myself and my clients. There’s a wonderfully magical fact about our brains, our minds – we can decide whatever we want. We get to choose. And we can do it in an instant.

Consider forgiveness, a topic that comes up quite often with everybody. We’ve all been wronged by others, or felt like we were. Retaliation is a choice. Bitterness, too. So is forgiveness. Maybe it’s a difficult choice, but remember we’re looking through the lens of asking if our choice – our assumptions – serve us well, or hinder us. Forgiveness serves us well. The other choices don’t.

You may be more prone toward one versus the other. Hence, the labels “optimist” or “pessimist.” But you’re not forever stuck with that. You can change it. Optimism serves you. Pessimism hinders you. You can argue that all you want, but it’s true. Every Psych 101 college class learns about self-fulfilling prophecies. It’s basic. And very real.

Think the worst things will happen and your behavior and choices will drive the results you most fear. It’s not magic or miraculous. It’s real. It’s a basic formula that our beliefs drive our behaviors which give us our results.

Rather than embrace pessimism, choose optimism. Devote yourself to really believing it. Study it. Read about it. Figure it out (I know I tell you that almost daily, but I do it because we’re entrepreneurs and CEOs…it’s what we do).

Which is it going to be? Fully accountable or excuse-making?

Most entrepreneurs and CEOs I know readily say they embrace fully accountable. But on deeper examination, they embrace it when it comes to their team members, or partners, or suppliers. Bringing it closer to home is harder. We’re talking about YOU. Oh, I know you want to be in full control, but this isn’t about control. It’s about accountability. Being responsible.

Let’s put it to the test. Which one will drive your growth toward greatness?

The blame game never benefits us. It will always hinder us.

Accepting accountability and responsibility is empowering. And it fosters growth. It also fosters some other things that serve our growth. Things like gratitude, empathy, forgiveness and grace. Blaming others fosters none of those things. Instead it fosters selfishness, anger, seeking pity and bitterness.

Again, you get to choose. You can make up your mind which one you want to have in your life.

You also get to choose whether you’ll grow great or not, too. Make this Friday the 13th memorable. Make it the day you decide to challenge your assumptions. Realize they may be dangerous!