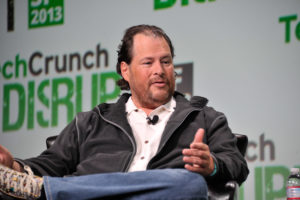 Last night on CBS’ 60 Minutes, Lesley Stahl did a piece on Salesforce about gender pay equality. During the segment, she spoke with Salesforce founder and CEO Marc Benioff who was remarkably candid about his company’s failings. Salesforce employs 30,000 people and generates $10 billion in annual revenue. I’m suspecting that Benioff has access to better data than you do.

Cindy Robbins is the President & Chief People Officer at the company. She approached Benioff with a question, “Do you know we may have a problem with unequal pay in the company?” Benioff scoffed that this wasn’t possible. He remarked how great their culture was and how they were awarded “best place to work.” Said Benioff, “We don’t play shenanigans paying people– paying people unequally. It’s unheard of. It’s crazy.”

Benioff’s conclusions were warranted. He had already been focused on promoting and retaining women at Salesforce. But equal pay had never been audited. So Cindy told Marc that they couldn’t dive in, look under the hood, find a problem, then close the hood after seeing how expensive the repair might be. Benioff declared, “I really felt that there’s no way that this can be true.”

So Ms. Robbins ordered a pay audit, but only after Benioff agreed to fix whatever was found, even before knowing the cost. The audit proved Salesforce had a persistent and widespread gap between what men and women were paid. Benioff and Robbins fixed it. It cost Salesforce $3 million in the first year.

Benioff knew what he knew. He believed what he believed. He had compelling reasons. He wasn’t merely jaded with optimism about how Salesforce operated. He had founded and led this company to have a culture that had been rewarded with proof of his rightness. But he was wrong. Just another case of a CEO served by the challenges and nudges of another person with a different (and turns out, very important) viewpoint. Kudos to Marc for listening and accepting the challenge to find out — and fix whatever was found.

As Lesley Stahl spoke to Benioff he remarked how this was now a very important mission for him as a top CEO in global business. He remarked that many CEOs were unwilling to listen to him urging them to do in their companies what he did in Salesforce. Some CEOs said Benioff, completely deny that there is any such disparity between what men and women are paid. They simply refuse to believe it. For some, ignorance is bliss. Dangerous, but stupidly blissful I suppose.

It speaks to how wrong we can sometimes be…even when we’re fully convinced we’re right.

Except for Google and Amazon, I’m suspecting that Salesforce has no rivals when it comes to technology and the ability to crunch big data. Benioff has access to resources and data to help him make the very best decisions. And he still got it wrong. Because he still had some bias toward his assumptions, even though those assumptions had merit.

What you don’t know will hurt you. Perhaps badly. And it may be harm from which there is no recovery.

Business owners and CEO’s are all susceptible to it. No human is immune. Our lives and experiences create a reality that we’re convinced is true. Until somebody nudges us to consider it may not be. And like Ms. Robbins, they’re able to influence us to look deeper into things so we can improve our insight. Two very different people working for the same enterprise. One a founder. One an employee. One a man. One a woman. One convinced he’s already got it right. The other questioning whether it’s all true. The interaction changed everything. Not only for each of them but for their entire company, including the companies acquired by Salesforce.

What assumptions are you making that could hurt your company? Well, the reality is – you have no way of knowing. Until it’s too late. Or until you surround yourself with other CEO’s willing to help you question them, and willing to help you dive more deeply into them to find out if they’re true or not. Getting outside perspectives, viewpoints and experiences can be far more valuable than anything other resources you may lean on for decision-making.