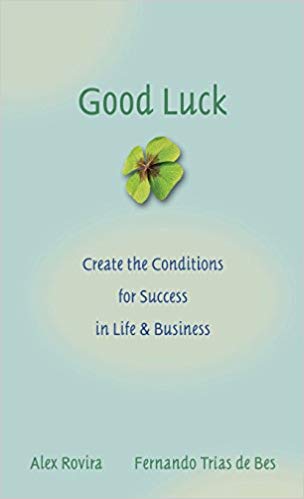 In 2004 a little book was published that captured my attention as I strolled through the bookstore on my weekly pilgrimage. The book was entitled, “Good Luck: Creating the Conditions for Success in Life and Business” by Alex Rovira and Fernando Trias de Bes. In spite of the fact that I’m not terribly fond of the business fable, I bought it. It’s a quick read. But the lessons are powerful, especially in a culture where it’s easy for people to feel entitled or victimized.

Over the holidays I spotted it sitting on the shelf, so I grabbed it and read it again while my wife was cooking Christmas day dinner. I hadn’t read it since I first bought it, but it quickly came back to me. The book makes a distinction between Good Luck and luck. Good Luck is intentional involving preparation and work, as opposed to the passive nature of generic luck where we just hope to stumble onto it, or hope it’ll magically find us.

Let me share some of the key principles of the book without giving away the story, but first, let me share a rather famous quote that I’ve posted on my office walls since I was in my 20’s. As a teenager when I first saw it, it was attributed to Goethe, the German philosopher, but who knows? Since then it’s most commonly been attributed to Scottish mountaineer and writer William Hutchison Murray. It speaks to the nature of Good Luck being impacted by human decision, preparation, effort, and determination.

“Until one is committed, there is hesitancy, the chance to draw back, always ineffectiveness. Concerning all acts of initiative and creation, there is one elementary truth the ignorance of which kills countless ideas and splendid plans: that the moment one definitely commits oneself, then providence moves too.

All sorts of things occur to help one that would never otherwise have occurred. A whole stream of events issues from the decision, raising in one’s favour all manner of unforeseen incidents, meetings and material assistance which no man could have dreamed would have come his way.

Whatever you can do or dream you can, begin it. Boldness has genius, power and magic in it. Begin it now.”

It’s easily in my three of all-time favorite quotes. Enjoying it and liking it are much easier than living by it. The difficulty is in the first four words – “until one is committed.” You wouldn’t think commitment would be so tough, but it often is.

The book covers 10 rules that are worthy of your deeper consideration.

Rule 1 – Luck doesn’t last long, because it doesn’t depend on you. Good Luck is created by each of us: that’s why it lasts. The authors make a distinction between luck with a lower case L and Good Luck with an uppercase G and L.

Random or lower case L luck may be more like serendipity than anything else. It can happen. But it can be elusive, too. Mostly, you don’t have any impact on it. So perhaps serendipity isn’t the best term for it because I think we can influence that, although it’s not fully in our control. Lowercase luck is likely more like that phrase we use when we say, “A blind pig can find one every now and again.” It can happen, even if we’re dumb as a sack of rocks.

Good Luck doesn’t work that way. It’s more lasting and powerful because we absolutely can influence it.

This is the first rule because so many people don’t believe this rule. Those who struggle think those who don’t “are lucky” while they often see themselves as “unlucky.” It’s their reality, but they’re deluded.

Rule 2 – Many want Good Luck, but few are willing to fully pursue it.

The pursuit requires strong intentions, effort, and determination. It also requires being more open-minded than most of us may be willing to be. It’s easier to just conclude, “We’re not lucky” and embrace feeling like a victim. To take personal responsibility and understand that our pursuit can impact it…well, that can make us feel more vulnerable perhaps. Accountability is hard. Victim thinking is easy.

Rule 3 – If you have no Good Luck right now, it might be because you’re under the usual conditions. To have Good Luck you must create new conditions.

The simple explanation of this rule is that “what got you here, won’t get you there.” This is a major stumbling block. We tend to do what we’ve always done, but we’re often dissatisfied with the same results. We want better, but we don’t create new conditions. It’s the epitome of being stuck!

Givers get. It’s that simple. But more importantly, giving to others, serving others is the right thing to do. It needs to be character though, not a tactic. Too many people I suspect are willing to give because they’ve got high expectations to get. It’s a tactic. Instead, you need to make up your mind that you’re going to work harder to become a better human being, a person willing and able to serve others.

Rule 5 – If you postpone the creation of new conditions, Good Luck never arrives. Creating new conditions is sometimes hard work, but you have to do it today. Right now!

Look for the seemingly unnecessary but indispensable conditions in the small details. Details matter.

The key word here is “seemingly.” Conditions may seem right, but perhaps they’re off just a little bit. Take a closer look to make sure. Where things are off a little bit, improve them.

Rule 7 – To those who only believe in chance, creating conditions seems absurd.

Those who create the conditions are not worried about chance. People committed to Good Luck don’t spend any time thinking about or worrying about chance. They’re too busy – and too devoted t0 – Good Luck.

Rule 8 – Nobody can sell Good Luck.

It’s big business to sell luck. There is no business in selling Good Luck because it’s impossible to buy it or sell it. You have to find it yourself, but others can (and will) help you. Nobody finds it alone and nobody sells it.

Rule 9 – After creating all the conditions, be patient, don’t quit.

For Good Luck to arrive, have faith. Stay the course.

Resilience, determination, and commitment. These are all major factors in your ability to find Good Luck.

Losing faith is a culprit that afflicts people, ruining their opportunities to find Good Luck. Have faith. Keep it. Increase it.

But opportunity has nothing to do with luck or chance: it’s always there.

This is where that 5-day series I produced on improving our way of thinking enters the picture. It’s all about Abundance. Opportunity. Don’t ever believe your lack of success is because there’s a lack of opportunity.

Your life will never lack for opportunity. What is most often lacking is our own willingness to commit to it, to see it for what it is, and to pursue Good Luck with full belief.

Good Luck is waiting for you. It needs your hard work and contributions.

Good Luck hinges on YOU.

Nothing else. That may be your first chore – to embrace that belief. To really understand it’s true, and to understand how true it is.

Good Luck can be found as soon as you’re ready. Remember, it never comes to you by chance. Good Luck doesn’t work that way because it’s not chance or random luck. It’s deeper and longer lasting.

The authors, two Spaniards who operate in the world of marketing and higher education wrote a short little postscript in the book that is worth nothing.

They write that the book took them 3 years to create, but it was written in 8 hours straight. They correctly state that some people will only remember the 8 hours. Others will remember the 3 years. Those who focus on the 8 hours are the people who believe the authors were lucky. Those who understand the 3 years believe the writers created the conditions for Good Luck.

What do you believe? That’s what matters!