How To Interview Job Candidates (335) 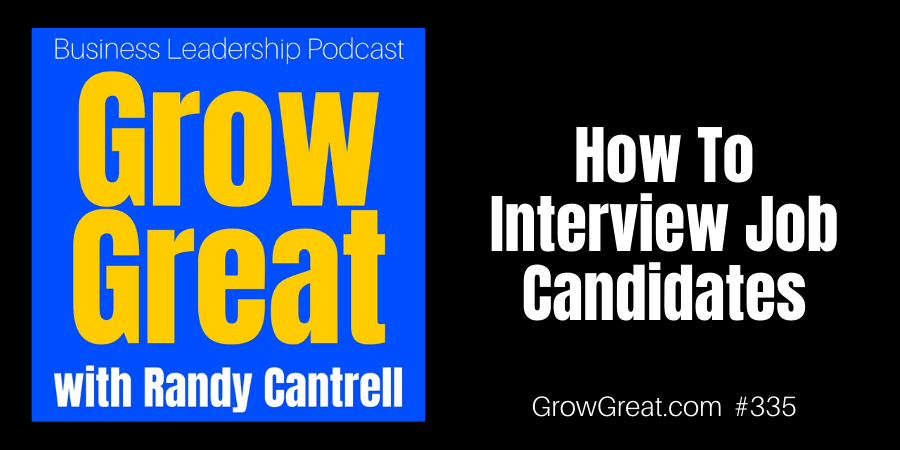 Small business owners often struggle to recruit, hire, train and retain people. For good reason, most don’t have a formal HR department headed with a professional equipped to navigate the modern personnel landscape.

There are a few things every small business owner can do to make the interview part of the process more impactful. Many owners have told me how they struggle during the interview. Very few have any formal or informal training. Most of us just learned on the fly. Sadly, we don’t always learn how to make this very important part of the process benefit us and the candidate.

Let me begin by encouraging you to read 3 books on how to hire people. Go to Amazon and look for these based on whatever criteria you decide. Know this – they’ll likely all be aimed at companies of size. You’ll have to do your own work to make them applicable to your situation, but that’s okay. You can do that.

I’m not going to provide you some step-by-step guide for interviewing because I don’t know your situation or context. What I do know is the goal of the interview – especially the first interview – is to figure out if you want to move forward.

Think back to your dating days. And if you’re dating right now, then this will be easier for you. 😉

You have some sort of criteria for people who may be suitable for dating. To each his own. It’s no different inside your company. Only you know what you’re looking for – what you’re most attracted to.

Get that settled in your mind. Like most dating people, it may change over time. What you thought you’d like…it may turn out that you don’t like that at all. That’s okay.

You’re searching for a candidate worthy of a first interview. People who tick most of the boxes in what you need and what you want. It doesn’t mean they’re perfect, but it means they may be worth pursuing further. You won’t know until you have that first interview.

HINT: Don’t make the first interview do too much.

HINT: The more the candidate talks, the better.

Small business owners tend to use the first interview for things other than seeing if the pursuit should continue. Many tell me they use it to sell themselves to the candidate. And most confess they do that before they really know if the candidate is suitable or not.

Listen, this isn’t like top-level college coaches who have watched hours of game film on players and had staff members go watch the player perform in person. Those coaches set their sites on the players they want to recruit. Much of that meeting is the coach selling their program to lure the athlete to attend their university. That’s not your situation. So don’t waste your time selling yourself or your company. Not yet.

The first interview has one primary function – to figure out if a second interview is worthwhile. At the end of the interview you’ll have one of three choices to make:

Two of these outcomes will warrant a second conversation. As you prepare for this initial interview remind yourself of this important hint – the more the candidate talks, the more you’ll learn about them and the closer you’ll come to figure it out.

Generally, I have found two specific types of questions most helpful. One is to ask them to describe a time when the outcome was most positive. Put the question into your own context. For example, if I were an electrical contractor looking for a cost estimator I might ask, “Describe a time when your estimate was most remarkable?” I want to hear them tell me about a time when they were most proud of their work.

As they talk, listen carefully. What are they focused on? What about it made them select this particular story to share? Don’t interrupt them, but continue to probe further. Don’t be satisfied with short answers. You want this to be a deep conversation.

“Tell me more,” is the magic phrase you can use to get deeper insights. And to keep the candidate talking.

This isn’t an interrogation, but many of the rules apply. For instance, you’ve seen plenty of cop shows where the detectives are trying to get the person to talk. The reason is simple. And it’s the same reason attorneys coach witnesses to just answer the question without volunteering more details. The more people talk the more we learn about them.

In your case, you want to learn all you can so you can decide if a second interview is worthwhile. If you catch yourself talking too much, then shut up. Be aware of your own talking. You’ll likely catch yourself revealing information that isn’t suitable for the occasion. You’ll have time for that later. Now isn’t the time.

Another question I have found helpful is the opposite of that first question. Again, let’s assume I’m an electrical contractor looking for an estimator. “Tell me about a time when things went terribly south.”

Again, I want to hear as much as possible. Do they blame others? Do they accept whatever role they may have played in it? How did they recover? What was the final outcome?

You can press without being an interrogator. If something sparks your curiosity, ask. Too often owners have told me that after the interview they wished they would have asked a question that for some reason they neglected to ask. Seize the moment. Ask.

Feed your curiosity. Follow your gut. If your intuition urges you to pursue details in one area, pursue it. Remember, you’re on a hunting trip to figure out if this person should advance in the process. The worst thing you can do is spend this time together and come away not knowing any more than when you went in. That’s your fault and nobody else’s. Avoid it.

Lastly, I’m fond of a third question that can give insight about why they may be looking to make a change and more importantly, what kind of things they’re most looking for. This matters because if it’s not congruent with my company and how I roll, then I’ll have fit question answered. It might go something like this, “Professionally speaking, describe what makes you most happy?”

I’m looking for the work they most enjoy. If I need a cost estimator, but this person describes all kinds of work that have nothing or very little to do with cost estimating, then I can either cut and run or probe further (which would be my ideal option). Maybe there’s other type work they’d be more suited for. Maybe that could fit inside my company, maybe not…but you may as well find out all you can. Many a good person has been hired for a slot outside the scope of what they initially interviewed for — because it was something they wanted to do more than the thing for which they were first interviewed. Good people are good people. You want to find all the ones you can.

Listen. Really listen. Listen to understand. Don’t prejudge. Don’t judge. You’re simply trying to understand this person better. Take notes and get it right. Nothing is worse than not listening carefully and thinking something that simply wasn’t there. Don’t let the interview be unproductive because you didn’t show up prepared to listen and learn.

Above all, be kind. There is no place for pompous, arrogant displays of power or authority. This is a human to human conversation. Be respectful, grateful and appreciative. Even though you’re not being interviewed (yet)…you are. The candidate is paying close attention. You want to put your best foot forward.

Let the candidate know up front that you’re just doing this first interview as the primary step in the process. Don’t promise a second interview, but don’t rub their nose in the fact that you may not move them forward in the process. They’re smart. They know how this goes. At the same time let them know that part of the process may eventually be more of a give and take exchange where they ask you questions. Their time will come. Maybe. 😉