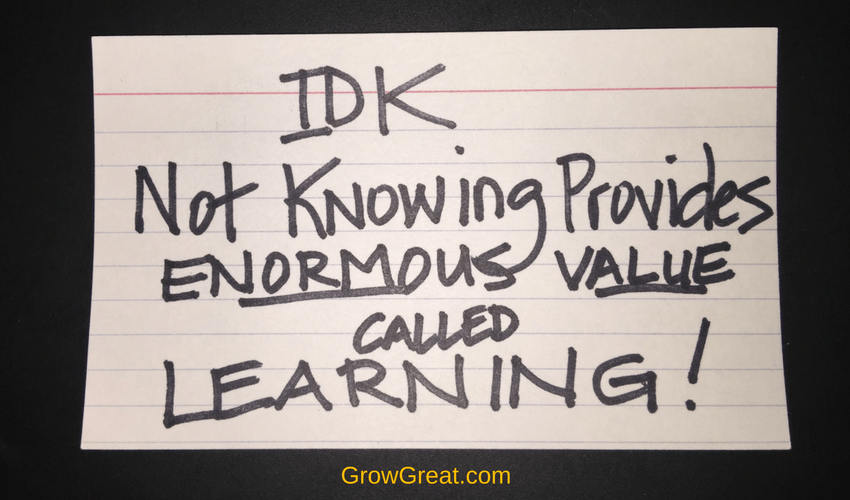 IDK is digital shorthand for “I don’t know.” I get it a lot. From young people. From older people. In response to a question. And it’s okay. Truth is, it’s better than okay to not know. It’s not better if you’re willing to stay there though. The value is in the quest to find out. Figure it out.

Growing companies are always on the prowl for good people. But how do you define “good?” Easy. What are you looking for?

I get it. Seems to make sense. Until you start to really think about it. Is that the right fit for your company? Are you sure?

Think about the biggest and best companies on the planet. Just consider two of them: Amazon and Facebook. Two founders started humbly. In small rooms with limited resources. What those guys knew then is not at all what they know now. Chief among their strengths is the ability to learn and figure out what they didn’t know.

In the case of Amazon, why didn’t the big shot, smarty pants who ran the biggest bookselling companies on the planet figure it out? All those people who knew the in’s and out’s of bookselling should have been the first to make it happen. Not some ex-investment banker who was a Senior VP at age 30. Within a few years of launching Amazon, with about $300K from his parents, he had a dinner with executives of Barnes & Noble who told him they were about to launch their own website, which would destroy Amazon. Based on their experience and know-how you could argue that it should have worked. It didn’t.

Facebook wasn’t the first social media site aimed at connecting people. Once you get past the IRC’s (Internet Relay Chat) of the late 80’s and early 90’s you likely don’t remember a site called Six Degrees, which may have been the first real social media platform designed to enabled users to upload a profile and make friends with other users. Six Degrees grew to about 100 employees and over 3.5 million users. They started in 1997, seven years before Facebook. By 2001 they were gone after having been sold in 1999 for $125. Cue up Queen’s song, “Another one bites the dust” here.

Both Amazon and Facebook should have been created by people already occupying their space. That is, according to the logic most CEO’s and HR folks are applying to their hiring process of looking for people who have already done exactly what you think you need done. It’s a stupid practice in many instances. Maybe even most. Sure, there are some very technical roles that require experienced expertise, but there are far more roles that not only don’t need it, but I’d argue they’re hampered by it.

It’s called perspective. You often hear people talk about having “fresh eyes” look at something. We know the value of letting people look at something when they’re not even sure what they’re looking at. Having some people who are brave enough to say, IDK is valuable.

Facebook and Amazon both questioned assumptions others weren’t willing to question. Both saw something larger. Jeff Bezos didn’t suddenly decide Amazon would be the “everything store.” He saw that future when he started. He began with books. It validated his idea. Traditional brick and mortar stores largely still haven’t figured it out. I know. I come from a heavy retail background. With all the vast retailing experience out there, a non-retailer entered the space in 1995 and is currently ruling the world of e-commerce with no end in sight. As for Facebook, it took off on Harvard’s campus, eventually launching on other college campuses, then high schools and by 2006 anybody over 13 could jump on board. All along the way, both companies learned, figured things out and managed to build extraordinary momentum in spaces they didn’t invent. Neither of them had done it before. Neither of them was burdened with preconceived ideas. Both knew they were figuring it out in real time. And Bezos even told early investors that he felt there was a 70% chance they’d lose their money due to failure.

Every business leader on the planet is looking for those two qualities, but I never heard them articulate that. Once I mention those two things they’re always quick to agree though. I know deep down they’re thinking they’d like to have those things, but those things don’t trump having already done it. Or having already seen it.

And there’s another element in all this to consider. The person capable of saying IDK has a courage and humility that will be exceptional. Most people are afraid to admit not knowing something. They try to bluff their way through. How doesn’t that help you grow your company?

There’s high value in a learner willing to leverage what others would call “naivete.” How is it leveraged? By asking questions others aren’t willing to ask. By looking at things in ways not available to the bashful. By figuring things out deploying insights they collect all along the way with their “stupid questions” and challenging viewpoints. By not surrendering to your industry or experience based assumptions.

Growing your company is going to depend largely on your ability to zig while your competitors zag. You can’t do that by being a copycat. Keep doing what you’ve been doing and you’ll discover (likely sooner than later) that it stops working. It doesn’t mean it was stupid at the time, but it may mean that to keep doing it without changes (that is, without growth, improvement, and transformation) — you’ll stop learning how to be better. And the market will make you pay. It always does!