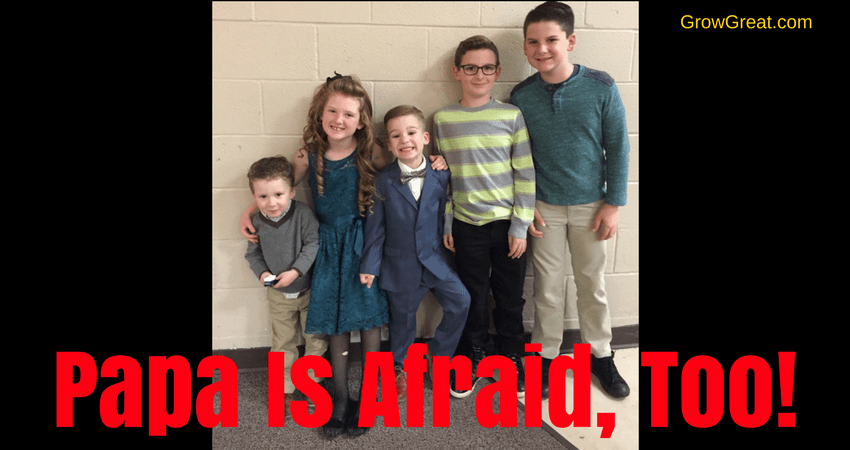 Five little kids call me, “Papa.” They’re my grandchildren. This summer the oldest will turn 11 and the youngest will turn 3.

When Max, the oldest, joined a soccer team when he was very young…he was paralyzed with fear. That was 7 years ago. I talked about it at the time so I’m not going to relive it here. You can go check it out for yourself.

I’ve seen displays of fear in each of these kids. What some are afraid of, others are not. Just yesterday one of them picked up a little snake without hesitation. The youngest probably is the most fearless, but he’s even afraid sometimes.

Type the word “fear” into a Google search and within a second Google delivers about 592 million results. Type in “fearless” and you get about 90% fewer results. Fear is a big player in our lives. Every time I hear somebody preach how we shouldn’t be afraid or I see various motivational sayings about having no fear I think of that line uttered by Robert Duvall’s character in the 1969 classic True Grit. The line was delivered to John Wayne’s character, U.S. marshal “Rooster” Cogburn. “I call that bold talk for a one-eyed fat man.”

Only fools are fearless. We’re all afraid sometimes. Of something. Listening to folks brag about having no fear is reminiscent of whistling in the dark. Something else we all do, in one form of another.

This isn’t about me as much as it’s about us. Our collective humanity. The fact that no matter who we are…we’re afraid, too. Just like my grandkids sometimes are.

My tribe has heard me confess that I’m sometimes fearful. I’m not about to humiliate anybody – especially a small person I love – about their fear. Rather, I choose to acknowledge it. When Max was fearful of joining in on the 4-year-old soccer game we had no idea what he was afraid of. He didn’t appear to know either. He just was. And no about of coaxing him was going to change it at the moment. He had to process it. And he had to mature a little bit. Out on the field, filled with kids running around without a clue what to do, we pointed out how much fun it appeared to be. Didn’t matter. He wasn’t about to join them. Over time I’ve developed some theories on what scared him, but who can be sure? He’s a smart, confident kid (sometimes downright cocky), but we’ve learned he really wants to know what he’s doing. While others might dive in and give something a go…that’s not how he rolls. He needs to know about it first. Figure out as much as he can before jumping. When he was 4 I don’t think we fully knew that.

Like my sign in The Yellow Studio says, “It is what it is.” But we didn’t know that at the time.

Peel back who we are and our fears likely make more sense. Even the fears that seem beyond understanding. I’m not trying to dissect your fears, but I am speaking up today to declare to my grandkids – and you – that it’s okay to be afraid. I’m afraid, too.

Today is Monday, May 7th. It also happens to be my birthday. I’m not 4, or 11. Yep, I’m old enough to have grandkids that age. And I’m still afraid sometimes. Maybe more often than you. Maybe less. Doesn’t matter. It’s not a competition. I’m afraid plenty.

I used to be afraid of the dark. I conquered that fear. Now I’m afraid of more serious things, but I can be afraid of stupid things, too. Just like you.

I can be afraid of rejection, not making a sale, failure and a host of other things. Declaring that doesn’t make me powerless to manage my fear. Instead, I think it takes the steam out of it. That’s what I’m telling you today. All this chatter – this ridiculous noise – declaring that we should live, or must live without any fear only gives fear more power. It’s delusional. And I can’t seem to find value in being deluded. Or deceived. Fear does not deceive me. I know it exists. And I also know that it’s mostly harmless, but sometimes it’s valuable.

In the past few days my son and I have talked about somebody in his field – he has a property inspection business. You know, the folks who do that home inspection before you buy that house. An inspector in another state was apparently trying to use a metal pole of some sort to take a picture while up on a roof. The metal pole came in contact with a power line and killed him. Three of my grandkids call my son, “Daddy.” I want him to be fearful of some things so he won’t harm himself.

My wife will text me that she’s on her way home. 100% of the time I’m going to text back that I love her and I’m going to tell her “be safe.” I want her to be fearful enough while driving so she’s careful. And she always is.

Does that level of fear prevent taking action? No. My son still does his work. My wife still drives. The proper fear compels them both (I hope) to take proper precautions and avoid being reckless. It does the same thing for us.

Even irrational fears – which admittedly may be the biggest player in our lives – have some basis in our own head. Telling us to not have them is empty advice. Instead, I have found value in people opening up about them, discussing them without feeling judged for having them (the most judgmental people likely are people unwilling to face their own fears). Every time I engage in a conversation with somebody about our fears we help each other figure out what’s really going on and we’re able to logically walk through our thoughts, our beliefs, and our actions. The more we face them by diving into them, the better able we are to overcome them, or at the least manage them so they don’t stall us, or paralyze us.

People think that’s wimpy I guess. I suppose too many think that strong declarations against fear are the best methods for dealing with it. Just don’t acknowledge it, ignore it and maybe it doesn’t really exist. Nope. Won’t work. That magnifies it making us think something is wrong with us because of all this talk about not having it. Forces us to think, “Well, I’m not supposed to be afraid, but I really am. Something must be wrong with me.” Nothing is wrong with you. You’re human.

Maybe it’s time to deal with that so you can better deal with your fear.