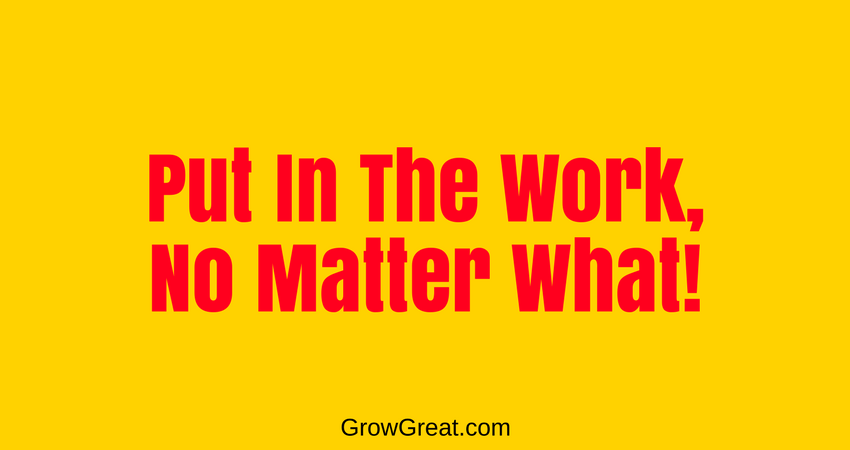 The world no longer cares about who you are, where you came from or whatever has (or hasn’t) happened to you. ZZ Top sang, “I’m bad, I’m nationwide.” Well, the good news is we’re all bad and global (if we want to be) now…thanks to mobile technology. The bad news is, we can’t hide anymore. We just need to put in the work.

Today’s show is for those who want to be entrepreneurs because you think it’s cool. It’s for those who love keeping up with the exotic vacations, fancy cars, big houses and whatever else jazzes you about people living the good life. It’s also a reminder that excuses don’t work. Ever. Not like we should.

In front of me sits a young man who in his early 20’s. A good student. Who didn’t work during high school. Didn’t have to. Parents supplied him. I tell him they meant well, but he’s disadvantaged. His brow furrows in bewilderment. I press on, as I am wont to do. “You haven’t learned how to put in the work yet,” I tell him. He bristles. And begins to extol his academic career. He’s studied hard. He’s earned good grades. I get it. But he doesn’t. Not yet. But he will. I’m confident.

He’s got big plans, lots of accomplishments he’s fully expecting to come his way by the time he’s 24. I know life is going to hit in in the mouth and knock his teeth down his throat. I want him to be ready. And to be able to give himself the best opportunity for success. This time next year he’ll graduate from college and he’s got no idea how to do battle in real life. He’s soft. He only knows what he knows. And it’s what he doesn’t yet know that may kill him unless I’m completely truthful with him. It may still kill him. 😉

Once he does the usual, “lots of people work hard, but they’re not successful” routine…and along the way points out guys working outside doing lower wage manual labor…I wait until he comes up for air. “Forget about the people you don’t want to emulate. What about the ones you admire…the ones you’d like to become like?” I ask. Earlier he whipped out his phone showing me various Instagram accounts of folks in spectacular places, doing cool things. He didn’t’ seem to realize that photos of us doing the work wouldn’t likely make for exciting photographic experiences unless we’re a rock star, pro athlete or celebrity. For the rest of it, pictures just can’t capture the magic of hard work.

I’m not in unchartered water in this discussion. It happens often. And I know I’m not alone. But I also know I’m not going to embrace negativity or pessimism because of it. Honestly, I’m not trying too hard to convince this young man of something he’s not likely going to instantly believe just because of anything I say. Mostly, I’m challenging him to think. Consider. Maybe he’ll come around. Maybe he won’t. Time will tell.

This young man isn’t all that unusual. We all see what we see. We all fail to see what we fail to see. He sees wealthy people displaying the results of the best times of their wealth. Would you Instagram your drug addiction, or your kids’ drug addiction, or your crumbling marriage, or your sleepless nights? How about your reliance on alcohol? Or your declining profits? Probably not.

We’re attracted to the look at the top of the iceberg. That’s where the beauty is. We all know the stuff below the waterline is responsible though. A very basic lesson this young man – and countless others – fail to understand.

The work is mostly private. The results aren’t.

“You’ve had a longstanding excellent academic career,” I observe. “Did those good grades just happen?”

“Tell me what that looks like – and what it’s always looked like. What kind of sacrifices did you make?” I ask.

He goes on to tell me about a variety of social activities, hobbies, relaxation and entertainment endeavors that took a hit sometimes because his grades meant more to him. “Man, look at the fun you gave up though…just to get good grades.” I point out how his friends knew he wasn’t living it up with them while he was back in his room studying, but mostly he was accomplishing that work alone. In private. Griding it out week after week. Because he made a choice to pursue good grades over a good time. It was his priority so he could achieve the outcome he most wanted.

There it is. The choice to work hard. The decision and effort exerted to accomplish something important. The willingness to sacrifice something desirable so something more significant can be achieved.

He hopes to get into a great graduate program. He’s not lazy. He’s not delusional. He crazy smart, but lacking insight.

Passion has been a hot topic forever. “Do what you love and the money (or success) will follow.” Not necessarily. But here’s the deal about passion – and I’m defining passion as finding that thing you’re good at, and that you love. Passion is important to keep you moving forward, doing the work when others don’t. This young man’s willingness put in the academic work while his friends partied. Because he cared about it. Sure, he’s a good student too – he’s got the brain power and whatever else is necessary for the work. That’s important. But talent or ability without the willingness to put in the effort is just sad. Look at your favorite professional sports team and I guarantee you’ll be able to think of an example.

As we wind down the conversation he asks me about my career, especially the beginning. I tell him how I entered retailing as a high school kid, working every free hour I could, including weekends when it was tempting to join friends doing fun stuff. I tell him how 70 plus hour work weeks were the norm for me for more years than I care to remember. But I tell him how many other people working around me were doing the same thing, but not achieving what I was. I wasn’t looking for any admiration from him…but rather was hoping to demonstrate to him that putting in the work, no matter what was simply the thing he could control.

I had some natural aptitude for some things. Early on I knew I had some qualities that translated well into success in retailing and being an operator. I was a good problem solver and I knew how to execute. So my hard work, including the long hours, coupled with my drive to achieve more (and take on more responsibility) led to opportunities. I didn’t decide what my natural talents were. I had to become more aware of them. Then I had to refine them. Hard work, no matter what, was the one element – I told him – that I knew I could control. As a teenager, I determined that nobody I worked with would outwork me. That was my choice.

“You wanna know the secret?” I asked him.

“Through all the years you’d think I would have encountered somebody who would challenge me, or beat me. I never have. That’s the magic of YOU making up your mind to put in the work, no matter what.”

He smirked. Smiled. And nodded his head.