If you haven’t yet emailed me your biggest leadership challenge, then do it right now. Just email me at RandyCantrell [at] gmail [dot] com. It’ll be anonymous. It’ll help me deliver more valuable content, especially this week while we’re focusing on leadership. 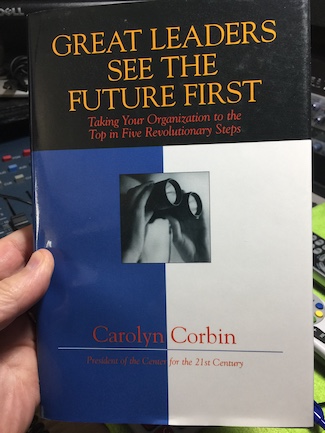 I’ve talked before about this book by Carolyn Corbin, circa 2000. Haven’t I? I think I have. I’ll credit that book with what may be my first encounter with that truth.

Carolyn’s opening sentence to the book happens to also be the entire first paragraph of the book.

“Leaders determine whether an organization succeeds or fails.”

It’s a strong statement. Another truth.

Carolyn was involved in research with IBM consulting. It’s easy to dismiss older books as being culturally irrelevant, but it’s a foolish dismissal. People are people. Our behaviors may change over time due to the influences of culture and society, but humans and leadership are predictably the same. We want the same things we’ve always wanted. Purpose, meaning, fulfillment. We want to be as engaged as possible in something meaningful. We want success and victory. We want to feed our families, provide some degree of security for today and for a hopeful tomorrow. We want to soar today and we’d like the opportunity to soar even higher tomorrow.

Read older books on management and you’ll likely have a valid point if you dismiss some of them as being culturally irrelevant. That’s because the nature of work has changed very much over time. We manage the work. We lead people. So I’m willing to concede that old management tomes may have limited application in today’s world. But great leadership is fairly timeless.

What do you believe to be true?

This is going to be an exercise that requires you to make a commitment to learning, understanding and growing your leadership (LUG). If you’re unwilling to do that, then your leadership is stuck. You’ll find every excuse to avoid putting in this work. You’ll minimize the positive impact it can have on your leadership, which means you’ll be saying you disagree with Carolyn’s opening line of her book. “Leaders determine whether an organization succeeds or fails.”

The paradox is that leaders who do that tend to overly stress their own importance as leaders, yet they put in the least amount of work to grow as leaders. The very best leaders never stop working on it. They understand that their beliefs fuel their leadership so they carefully inventory how they see the world, what they believe and why. They foster constant curiosity to question themselves, not in some second-guessing way, but in a way to make sure they’re seeing things accurately. Clearly. Such inner debate requires a strength of character, and comfort with oneself, that most don’t have. That’s among the many reasons why great leaders are rare. Too few are fully committed to the quest.

That’s why I’m starting with beliefs. A leader with questionable character can try to deploy kindness, but fail because the kindness is a tactic, not a legitimate behavior with honorable intentions. Tactics and strategies are means to an end. Character behaviors are what they are without regard to the outcome. It’s doing what you do simply because you’re committed to it. You’re committed to it because you believe it. Your belief isn’t conditional on a circumstance or situation. If you’re honest, then you’re honest whether people are looking or not. If you’re not honest when nobody is looking then you’re dishonest.

What do you believe about yourself?

What do you believe about people?

What do you believe about your organization?

I’ll help you by telling you some of the things I believe. But I want you to focus on what you truly believe.

I believe people want to do good work. I believe if they’re properly served, people will excel (or at least try to).

I believe politeness and kindness serve people inside and outside the organization. In business, I think they’re competitive edges. “Please” and “thank you.” “Sir” and “ma’am” are competitive advantages.

I believe people are honest, but it’s the leaders’ job to protect them from the temptation not to be.

Those are just a few highlights intended to get you started in crafting your own list of beliefs.

These are important because our beliefs serve as our lens through which we see the world and our place in it. It colors everything we do. All our decisions and choices stem from our beliefs.

How do you express these beliefs?

This is where the rubber meets the road. It’s one thing to say what you believe. It’s something else to display it. To prove it.

I operated retail companies for many years. Take my belief about honesty. I believe people are mostly honest, but I also believe leaders have a responsibility to protect people from temptation. That was manifested in ongoing cycle count inventories. It was manifested in being overly obvious about the controls on inventory. No threats. No heavy-handed warnings or signage. Just constant, ongoing actions designed to first make sure inventory was accurate and secondly to show everybody we’re focused on it. Thieves will steal. No matter what you do. Honest people can steal if the opportunity is too tempting. I focused on helping keep honest people honest because of my beliefs.

Beliefs that are unexpressed serve what value?

I’m optimistic. I mostly think we’re able to make tomorrow better than today. I’m not a victim. Nor am I entitled.

But if that’s not manifested in behavior and actions, then I don’t know what good it would do me. I guess I could feel good telling you that I believe those things, but that’s shallow.

We’re talking about leadership beliefs, not religious beliefs, but we’re talking BELIEFS. Generally speaking. You can’t separate one aspect of who you are with another. I’m a Christian. There’s no separating that from my business identity. I’m a mature business guy with decades of C-level experience. I can’t separate that from how I view the world, or in how my beliefs have been shaped. What I’m saying is that you are who and what you are. Yes, growth changes us, hopefully for the better. But our context is the total sum of who we are. Our beliefs are shaped by our character and our character isn’t segmented by our personal character and our work character. At least, it shouldn’t be.

That’s not a moral judgment. It’s just a practical question to help you know if it’s really a belief – one you’re willing to express – or if it’s just a shallow belief that you’re happy to compromise.

What price are you willing to pay for what you believe?

Toward that end, I’ve eaten lots of profit, but I believe I’ve invested in delivering a customer experience that strengthened the business and the customer base. I believe it’s an extraordinarily high ROI. I know other CEO’s who have operated very differently because they didn’t share my beliefs. They believed in a more transactional view of the business. Every transaction deserves a certain degree of profits. They express that belief in how they operate their business.

I’m beginning here because, as you can now see, it will determine everything else in your leadership. And I’m using the term “belief” because it’s not just a passing thought. Or a casual “think so.” It’s deeper than that. More entrenched in your character than that. In fact, I’d go so far as to tell you it’s a non-negotiable. Can you change your beliefs? Sure, but it’s going to take quite a lot to convince you otherwise because you hold these beliefs as deep convictions.

Begin this week by putting in the work on yourself. I promise it’ll be worth it. Expressions of your beliefs are crucial because as the leader, you see the future first. It’s going to determine the direction in which you take the organization. It’s also going to determine success or failure for the company.