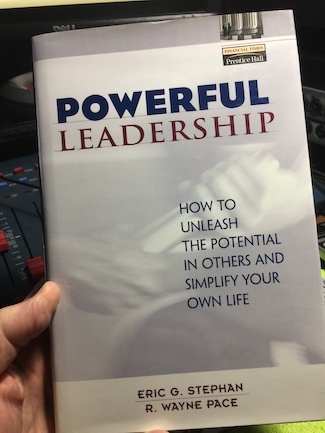 Powerful Leadership: How To Unleash The Potential In Others And Simplify Your Own Life was published in 2002. It was written by two professors of the business school at BYU. Early in the book, there’s a little section subtitled, “Managers Have Huge Blind Spots.” The authors write…

“One of the most distressing patterns in modern organizations is the apparent and long-standing view that managers fail to recognize that employees are human beings who may be suffering at their hands.”

Among the many blind-spot generators is forgetfulness. People promoted to leadership positions, or those who assume that role because they own the place, forget how important they felt it was to be heard. Or how important it was – and is – to have freedom.

Leaders incorrectly think their power and effectiveness is based on their ability to control. They work hard to control the work, the output. They work hard to control the people doing the work. They impose themselves on the employees and the work robbing people of their individuality, freedom, and flexibility. The result? Employees watch the clock, staring off into space, spending screen time with their phones and having low expectations to be engaged in their workday. Mostly, they may be driven to stay out of trouble by staying out of sight.

As we prep for some conversations next week on leadership I figured it may be wise to end this week by talking about our first mandate as leaders – to do no harm. Can we at least agree we should limit the damage or harm we do?

I know we want to find out how we can be leadership superheroes, but before we can take positive actions we first must stop the damage. Let me just give you 3 things to ponder as we prepare for deeper leadership discussions next week.

You’re doing some harm. It goes with the role, but that doesn’t mean you should blindly accept it as a necessary evil.

Let’s define harm. Harm is simply inflicting some degree of suffering to the people you lead. You’re not going to get it right 100% of the time.

Too many leaders refuse to accept responsibility for the harm they do. Some just don’t recognize it’s happening at their hands. Others may not care.

The very best leaders embrace and crave responsibility and accountability. They accept the fact that they influence people. They face the reality that in spite of their best intentions, they can sometimes hurt people.

The big blind spot for leaders is to assume leadership makes them impervious to mistakes, errors in judgment, bad behavior or any other source of harm caused to people and the organization.

NOTE: Don’t be confused about harm. Conflict and correction aren’t harmful if done well, with honest intentions. The employee who is doing poor work must be corrected. To sit down and confront the poor performance isn’t causing harm to that employee. Refusing to do that IS. Allow the person’s poor performance to persist and eventually cost them their job – that’s harmful. Check your perspective.

No matter how you came to be in charge, commit to remembering. This will vary depending on the length of your career and the depth of your experience.

I’ve spent decades operating businesses and leading organizations. I’ve got lots of memories. Many memories of colossal failure in leading. Many memories of miserable bosses I had early in my career. A few memories of great bosses I had. These all serve to help me today. Mostly, they remind me how much life has changed and how my humanity has not remained static. What drove me in my 20’s isn’t quite what drives me today. That’s humanity – for all of us.

How do you suppose failing to be human is going to help you excel as a leader?

A big factor in being human and remaining human is to tap the brakes on your ego. Vanity and pride can wreck your leadership. If you suppose that you must appear perfect, brilliant and always right, then you’re in trouble.

Being human and remaining human mean embracing humility and honest intentions with everybody. It doesn’t mean you’ll be perfect and always get it right, but everybody will see and know you’re trying. And it will count for your favor and theirs.

There’s no excuse for failing at this. It’s just making up your mind to do it.

Whenever leadership refuses to admit they’re wrong they inflict harm. I’ll argue mostly to themselves. They don’t do themselves any favors trying to appear perfect because everybody knows better. It goes hand in hand with step 2, but I broke it out because it’s among the most powerful things I think any leader can do. Fix it. Make it right.

Some of my greatest moments in leadership were where I got it so wrong it wasn’t funny, but I was quick to recover. I stood in front of people – either as individuals or a group – and fell on my sword. I owned up to my mistake, took full responsibility, asked for forgiveness and vowed to do better.

No leader can do that habitually. Do what they want, and constantly apologize, only to repeat the feat all over again. But when you’re dedicated to serving people as a well-intended, well-behaved human being, but you mess up, then making it right will work.

Don’t ignore fixing your mistakes. If you want others to fix theirs (and you do), then lead the way by showing them how to do it.

Yes, treat people the way you want to be treated. Kindness, gentleness, mercy, grace, forgiveness and love. I know those aren’t normal management or leadership terms, but they should be because they’re human. We all crave those things. Don’t suppose that because our interactions are happening at work, then those human emotions aren’t in play. They are. They always are.

Truth is, this bonus step can likely stand all alone as THE rule to live by if you want to avoid causing harm to people in your organization.

Don’t be fooled into following the pattern of tyranny. Steve Jobs and others have paved the way for people to think being an obsessive tyrant is the way to greatness. Don’t believe it. Steve Jobs was brilliant at many things, but leadership wasn’t one of them. I wonder how much grander his success may have been if he had learned to become a great leader.

Be kind. Be optimistic. Be the first to serve others. That’ll be a great start to your leadership growth.