Everything good is sales.

Everything bad is lack of sales.

Go ahead. Argue against it. Push back.

I know what bad looks like and how it feels.

There’s a good reason why the first leg of my business-building trifecta is “getting new customers.” Nothing comes before that. Not really.

The other night my wife and I were watching the History channel series on “The Food That Made America.” Part of that history involved Milton Hershey, creator of The Hershey Company, a chocolate maker.

Hershey had sold an earlier company for $1M. He poured that money into a remote area of Pennsylvania where he designed a town and a factory. All before he even had a recipe for milk chocolate, an idea he had discovered from European chocolatiers who used powdered condensed milk. He was determined to use fresh milk from the many dairies around the site of his new city and factory.

Construction went on for over 2 years and was almost complete before a Hershey employee finally stumbled on a recipe. And, as they say, the rest of history.

My wife and I were observing how backwards it all seemed. No recipe for milk chocolate…just a die-hard determination that it had to be milk chocolate and it had to use fresh milk. No customers. But he built a city and an enormous factory.

Okay, it can work. Clearly. But that doesn’t mean it’s how you should go about it. It’s not advisable. Unless you’ve got a brilliant idea, a lot of money and a do-or-die spirit. Hershey had all of that. Most of us don’t.

We need to get new customers!

Making something good happen is what drives us. It’s what separates us from others. Confidence and belief that we can affect change. The desire to control our destiny rather than let others impose on us. And if we are going to fail, we’ll do it on our own terms by doing things based on our deep beliefs that they’ll work.

Success stories are those where it worked out.

Stories of failure demonstrate instances where it didn’t work out.

How are you gonna know until or unless you try though? You won’t. You can’t.

Let’s think about what we can do as business owners and leaders to make something good happen.

Step 1 – You have to believe you can.

A person calls tech support for a manufacturer of a surge protector. You’ve likely seen this social media meme. I chuckle every time I see it…probably because I spent many years in consumer electronics and it resonates with me. 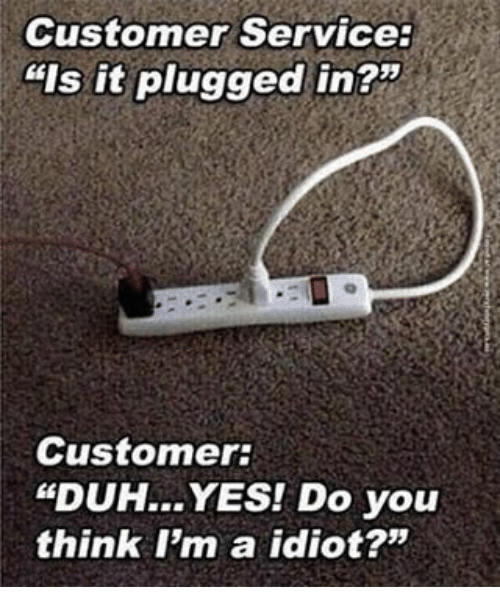 Starting with something as fundamental as, “Is it plugged in?” eliminates the most obvious problems. Well, unless the customer is a complete moron as the meme depicts. 😀

That’s why I begin with you – and your belief that you can do something that will affect positive change. Until or unless you truly think you have the capacity as an owner or leader to influence the outcome, then you’re sunk. What purpose do you serve as a leader if you lack that ability or influence?

Leaders must deeply believe, “If it is to be, it’s up to me.” Not in some self-centered, I’m-going-to-do-it-all sort of way. But in a way where you know that somebody – namely, YOU – must step up and get the ball rolling toward pushing back against bad things happening.

I’ve intentionally used sales – specifically a sales slump – as the metaphor for today’s show. And I’ve done so because slow or low sales create more tension than anything I know.

Imagine that your sales are 15% lower than projected. You’ve hit a dip you didn’t expect to hit. And you’re without evidence as to why. If you dive in to sort it out without deeply being convicted of you – and your team’s ability – to remedy this problem, then you’ll be grabbing at straws and likely drown. Confidence and belief are key. It starts with your own so you can then relay that to your team. A major part of your role as a leader is to provide encouragement so your team will have the confidence you have.

Do not underestimate the value of belief.

Whenever bad things happen the first reaction is to finger point and find somebody or something to blame. Eliminate that. Don’t even let it get started. It can be tough to stop once it starts.

Instead, insist on evidence and make people prove their theories. Theories and assumptions aren’t bad. You just need to insist that people effectively argue their positions.

Key: Have your team focus on themselves and the organization. Rather than look to things as nebulous as the economy, or the weather – hold them accountable for keeping their search on how the company is reacting or managing all the external forces.

It’s vanity to think external forces don’t influence our businesses. But it’s NOT vanity to focus on how our business is dealing with those forces. That’s where we’re going to discover some ways we can improve.

Don’t spend time crafting fairy tales to make everybody feel better about their effort. Nobody cares about your effort. Lots of folks are out here working hard and going broke. Besides, when you impose a culture of truth-finding and truth-facing you’ll build a culture of high performance.

Don’t let anything or anybody – including yourself – off the hook. That doesn’t mean when you find the truth that you rail against it. Or that you find somebody to barbeque. It means together – you and your team – stare it in the eye, acknowledge what you think you did wrong (collectively), and you then focus on the final step.

Step 3 – Work out a plan to answer the question, “What should we do next?”

It’s great to know the future years from now, but none of us have that ability. We sometimes think we do. We’re wrong.

How provides that confidence that is so important to you and your team. Belief kicks in when we can best see how we’re going to get out of this mess. This is the business strategy part of the solution.

Let’s assume that our 15% sales decline (we missed our budget by that amount) appears to be due a few things. One, we based it on our historical seasonality. The month before we blew the lid off our projections. That month was also based on historical seasonality. But some of our key vendors had special financing for our customers this year that didn’t happen last year. When we look at the financing data it’s clear that our financing business is off the charts. Those inducements drove business and shook up our seasonality. Two, the competitors to our key suppliers responded and a month later they offered their own financing. Our team concludes that we were both ill-prepared to take full advantage of the promotions offered by our suppliers and we were equally unprepared to combat the competitor’s offers a month later.

Deeper investigation shows that almost 80% of our sales with the promotional financing involved bundling – that is, customers purchased more because of the financing. Our average ticket was significantly higher.

The team decides a good strategy would be to incorporate in-house financing coupled with aggressive bundle pricing. They discuss concerns about how that may adversely impact margins and future business, but they’re more concerned about losing momentum during these months that are historically their strongest.

When people are buying, help them buy more. When people aren’t buying, you’re not likely able to compel them to buy. It’s a classic mistake businesses make, especially businesses without deep pockets to drive promotion and advertising.

The team leans into making the most of the seasonality that has persisted for more than a decade with very little variation.

Business success is about making wise adjustments. Will the team’s strategy work? They don’t know, but they believe it will.

Now it’s time to keep your eyes on it and see how it goes. Adjust as needed. Course correction may be necessary. Don’t be afraid to learn from failure. Find greater success. Make something good happen, then make something even better happen.

P.S. Yes, I’ve gone back to Grow Great as the name of the podcast. It just feels better. Right. And it’s in keeping with what I do best according to trusted advisors. I leveraged the power of others – other people with whom I feel safe – who urged me to lean into my natural state of being a counselor. It’s congruent with my character strengths, my talent strengths and my personality. It’s also evidence of working live without a net and letting you behind the curtain to see how things work around here. Next time I’ll share more details so you can learn from my process. It’s all part of the plan of us helping each other figure things out for ourselves, but without having to do it alone!