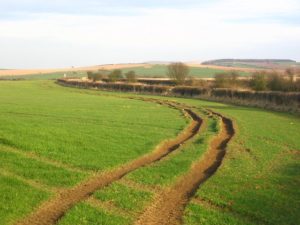 Getting your vehicle stuck in a rut ain’t fun. And it can be difficult to get yourself out. Which is why sometimes we have to get somebody to pull or tow us out of a rut.

In life, our ruts are just our habits. Sometimes we call them what they truly are, but more polite language makes them seem less destructive. They’re the habits that prevent us from moving forward. We get stuck. In a rut. Or in multiple ruts.

It happen when the habits have persisted for so long we’ve worn such a deep groove into our life that we can’t escape it. Not without some help. Maybe a lot of help if we’re really stuck.

Are there ruts in your life that have you stuck?

Need some help being towed out of them?

Are you just going to sit there and remain stuck?

This is the week to do something about it. Shake it up. Jump out of it and jump into an improved track so you can move forward.

Unfortunately, it’s not that simple or easy.

Experience has taught me a few things about ruts. Largely, they’re habits. We sometimes refer to them affectionately because we fool ourselves into thinking they’re serving us…when in fact, they’re restricting us. Holding us back. Digging us in. Sticking us so we can’t move.

There’s a phenomenal impact that happens to us when somebody cares enough about us to ask us challenging questions. Understanding, compassion, and support from people willing to invest in us, and willing to let us invest in them, will either pull us or push us out of our sticky habits. First, by making us aware of them. Until we see our habits for what they are – sometimes they’re excuses, sometimes they’re crutches, sometimes they’re something else – we’re unlikely to change them. That’s where the friendly, safe challenges serve us. But the phenomenon I see is how people react when those habits or assumptions are challenged and they then see things more clearly. Sometimes they see clearly for the first time.

Some get physically ill. No, nothing serious. Nothing worthy of seeing a doctor necessarily, but I’ve seen people quite literally get sick finding it tough to get out of bed for a day or two. The shock to their system is so severe they physically need some time to process the clarity and deal with the truth that THEY have become the problem.

Has that ever happened to you? I know the feeling. As awful as those hours are, the impact is powerful. For me, it was the realization that I had it so terribly wrong. As much as I didn’t see it earlier, once it was pointed out to me…I couldn’t resist seeing it. And glaring at it. It made me sick! But the sickness didn’t last because determination quickly set in.

And that’s the other side of the phenomenon. Making up your mind to face and deal with the habits that have become the ruts of your life.

It’s possible to do this work alone. It’s just highly improbable because comfort is more important to us than challenge. So we stay comfortable with our bad habits. The ones that are holding us back. Sometimes, the habits are more properly assumptions.

It’s why business performance plateaus. And why performance can largely become stagnant. It’s why leaders once thought to be superstars can lose their starlight power over time. It doesn’t feel like complacency. Until it’s too late.

Leaders don’t confess, “I’m comfortable. I’m complacent.” Because it doesn’t feel that way to them. “I’m working as hard as I can,” they’ll say. Or, “I’m working just as hard as I ever did.” But that doesn’t always address the real issue. It doesn’t address their now stale assumptions or bad habits. Facing those is best done with outside help. Safe people brave enough to serve because they want to see you accelerate past those assumptions and habits.

New levels of performance rarely happen organically. They need drivers. Those drivers can be competition. They can be the quest to survive. Humans own and lead companies. Humans need other humans willing and able to push or pull them toward something greater than the status quo.

There’s no need for our bad habits to become ruts. No need for our blind spots to expand into something bigger. We’re without excuse to be stuck because we’re humans with an enormous capacity to connect and engage with other humans who can help us.