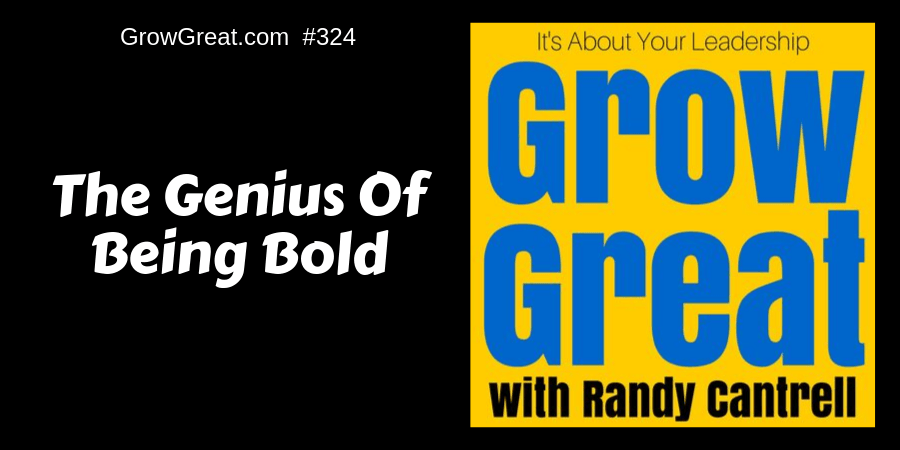 Genius gets more freely thrown around than hero. Both are grossly overused. But I’m still going to use genius when it comes to today’s topic of boldness.

Bold has some terrific synonyms.

I rather like them all. Now you can better understand why I’m going to use the word genius to describe it.

In the last episode, I talked about the power of your network and how I often wished I were more extroverted. Well, this is at the heart of it for many people. For me, it’s just an energy thing. It’s not so much a fear thing. I can look extroverted, but it’s exhausting because it drains me. My son is an extrovert and you can see his energy go up when he’s around people. I’ve learned that many people dread being around others because they lack the boldness necessary. Fear and embarrassment stall them.

But what about when it comes to taking action that you know would propel you forward? Or actions that you believe would take your business forward?

The One Common Denominator In Success

Boldness. That’s why without reservation I use the term genius to describe it.

Last weekend I watched the short Netflix series, Inside Bill’s Brain: Decoding Bill Gates. Like many of you, I’ve read lots of biographies about remarkable people in every area, mostly in business. It seems to me they all have one thing in common. And it’s not brainpower genius, which admittedly Bill Gates may very well possess.

It’s boldness. It’s the ability to chase and pursue their goal without shame or embarrassment. They care more about achieving the goal than anything people may think or say about them. It’s so simple and powerful that it’s got to be considered genius.

That has to be the most famous quote from Napoleon Hill’s classic book, Think and Grow Rich. While I don’t think it’s an absolute truth, I’ve grown to appreciate how accurate it is.

For example, people can argue that you can think about being able to fly and no matter what you do we can’t fly because we’re not birds. But we invented machinery capable of helping us fly. So there’s THAT.

I think the real emphasis belongs not on the word “conceive” but the word “believe.” Bill Gates and so many other very accomplished people truly believe in their pursuit AND in their ability to achieve it. We look at them and wonder, “How did they do that?” Perhaps the answer is no more complicated than they conceived something, believed it and then vigorously pursued it with shamelessness. Watch that documentary on Gates and if you knew nothing about him before you came away knowing that he simply doesn’t care what anybody thinks of his pursuits. Equally important is his insistence to surround himself with people who also believe in it. Easier to do when you’re so devoted to something as he’s been.

Much has been written about overcoming fear. It’s still a message we need to constantly hear because for most of us, it just never goes away. We mostly are unable to conquer it once and for all. It’s an ongoing project where some days we handle it better than other days. And it doesn’t matter how much logic or intellect we apply. When we pause long enough to think about it, it makes no sense, but still we experience it.

Embarrassment mostly makes no sense. Our fear of what somebody may think of us or what they may say about us – and mostly these are people we don’t even know – is so real in our head. And that’s all it takes to paralyze us. That can be all it takes to squash our ambitions. Not so with the highest achievers on the planet.

How do we improve (increase) our boldness?

I’m only going to give you one thing. Just this one thing…do it and it’s bound to improve things. Maybe the improvement will be big. Maybe it’ll be small. I suspect it all depends on how devoted you are to grow in this area.

That’s it. Focus on growing your audacity. Focus involves a few important things.

The problem is too many of us aren’t fighting hard enough. We’re too easy to play against. We need to make life harder for our opposition and less hard for our goals. Let’s stop trading the risk – just the mere chance we may be embarrassed – for our achievement. Is the risk of embarrassment worth giving up your dreams? I don’t think so.

Previous post: Metcalfe’s Law: The Value Of A Network (323)