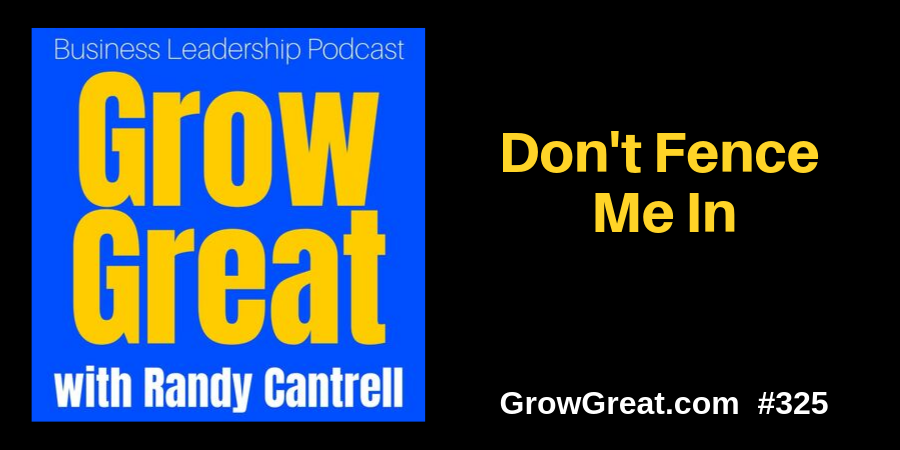 In 1945 Gene Autry released a recording of the song that hit #4 on the charts. By then the song was about 10 years old. Through the years it’s been covered by lots of people from Harry Connick, Jr. to The Killers to Willie Nelson. It’s a country and western song that depicts the yearning to be free to roam. To be able to explore freely without restriction.

I live in the city. We have literal fences that separate our yards and property. Domestically we’re fenced in. Professionally the fences appear much different. They’re the restrictions of what we think we’re supposed to do. They’re the tactics people tell us are expected if we want to get positive results.

Common knowledge and common wisdom aren’t necessarily things to just cast aside, but they may be worth questioning. This week I heard two musicians talk about how they went their own way. Tristan Prettyman and Mark Knopfler. Both taught themselves to play the guitar and admit that they’re beyond being fixed. And who would want to fix them anyway. I mean, they’re both very talented and providing the world high value through their music. Tristan confesses that songwriting is difficult. Knopfler talks about how he left writing newspaper stories as a journalist because there were songs in his head prying their way out.

I kept thinking about what they said and how neither of them followed some formula. They simply took a step, followed by another, then another and all along the way they figured out what might work for them. Then last night I watched an old interview John Prine did. For 6 years he was a mailman until he got up one night at an open mic event and sang a song he had written. The crowd liked his music and he began playing regularly.

Don’t fence me in means don’t think there’s only one path toward growth, improvement or success. Don’t fence me in means stop looking for the formula or secret. So many people, not just creative types like Prettyman, Knopfler and Prine, find success by not doing what everybody is doing. Conventional wisdom is frequently a fence that may prevent people from figuring out what will work.

This is why I’m so fond of surrounding ourselves with different viewpoints, perspectives and experiences. It breaks down fences and opens us up to possibilities we may have never considered. Knopfler says no guitar teacher would dare teach a person to play the way he plays because technically he breaks all kinds of guitar playing rules. But it works. In fact, it works so well he’s considered among the world’s premier guitarists. Aren’t we glad he refused to be fenced in to do what everybody else did.

Are you just following whatever leader has captured your attention? Or are you making your own way…figuring out what works for you?

In the last show I talked about the power of boldness – the ability to not worry about being embarrassed. That’s part of this don’t fence me in mindset. It deals with how comfortable and confident you can be knowing that you’re not following the crowd. Prine could have thought, “I’m just a mailman. And I’m already 24. I’ve never played live in front of a crowd before. And besides, I don’t know if my songs are very good.” Instead, he got up, guitar in hand, approached the microphone and sang a song. I don’t know what he expected, but I doubt he thought that one moment might alter his life forever. But it did. That’s not how musical careers are supposed to begin, but that’s how his began.

Prettyman wasn’t planning on becoming a musician, a singer/songwriter. She had no idea how to even begin such a quest. She was working toward some career that had to do with surfing. Something sort of business-related. If you want to break out in music, you don’t do that. But she did. One thing led to another. And she displayed courage along the way.

All the advice. All the formulas. All the recipes. And ALL the stories I hear of extraordinary growth, improvement and success are stories of people who just took one action, which led to another action and sometimes they stumbled, sometimes they didn’t. They found THEIR WAY to the goal, which sometimes wasn’t even a goal at the beginning.

We look for formulas, recipes, secrets and fences because we want somebody to give us the easy answer. The truth is, there are no easy answers. An even bigger truth is, answers that can be consistently repeated with success are super rare. We have to find our own way and be brave enough to venture beyond and outside the fences. What worked for others may have value in our learning, but that doesn’t mean it’s how we ought to go. We have to be explorers in charge of our lives and careers. Life is about discovery. The area inside the fence has already been discovered. There’s nothing new there. That’s the problem with being fenced in.

Be adventurous. Be curious. Be bold. Be confident. You’ll figure it out.