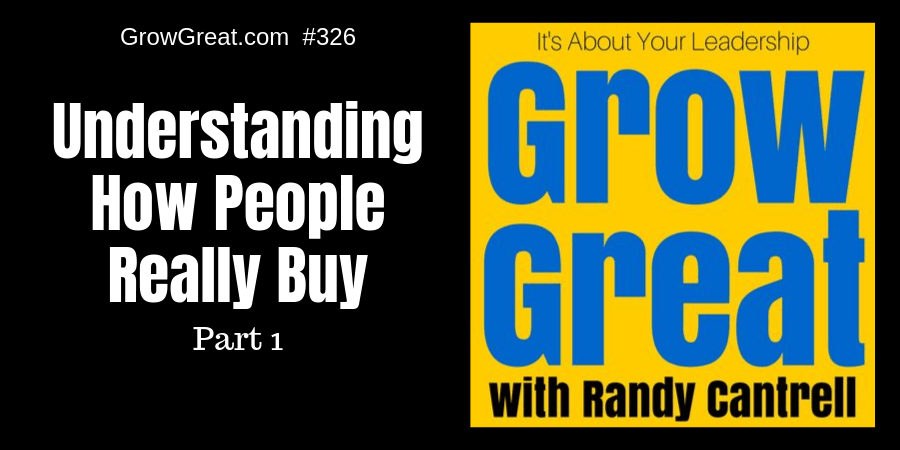 Salespeople tend to think features will make a difference. If only their product or service included something it doesn’t yet have…then their sales success would be possible. “Customers want _________ (they’ll talk about something specific that’s missing from their current offer).”

Disruption is the order of the day. It’s not new and it’s here to stay because everywhere we look there are problems. Everywhere we look there are entrepreneurs working to figure out a better way. Many of them are attacking problems in industries where they have no prior experience. It’s happened in the taxi/limo business, the mattress business, hotel/motel, retail, computer hardware, music distribution…and just about every other industry you can name. If it hasn’t happened yet, it will. And for good reason – because every industry can be improved.

Any of us with a sales background have to realize we’ve been conditioned over time. The winners are those with the best feature set. That’s what we believe. But it’s not true. And it’s never been the universal truth that we think. Which can explain why achieving success can become more difficult over time. All the preconceived ideas focus us on what we don’t have, convincing us that if only we had what we don’t, then it’d all be different. No, it wouldn’t.

Because we don’t understand how people really buy.

Instead, we’re able to point to the economy, industry challenges and a host of other things that may have nothing to do with our current failures. Society is largely driven by creating fear and hysteria. We’re easily influenced to think things are far worse than they actually are. The minute a child goes missing moms in the area tighten the rein on their kids believing the streets are filled with bad people abducting children. Pessimism is easy. Fear is even easier. But I’m talking about something tangible. I’m not just urging you to be optimistic, although that would help. 😉

Each of us is conditioned by our experiences. All this conditioning affects our consumer behavior, too. We lean toward our conditioning and it can be very difficult to break it. That’s why we commonly find people dug into a position and unable or unwilling to consider alternative viewpoints or opinions.

Our experiences coupled with all the media exposure bombarding us daily deepen that conditioning. That’s why getting attention is so urgent for marketers. It’s also why it’s so difficult. We’re roaming about on autopilot much of the time until something extraordinary grabs our attention.

Beliefs. Prejudices. Experiences. Perceptions. These are the things that create our autopilot behaviors. And choices.

When I was growing up my dad was a General Motors guy. We always had a GM car. Usually either a Pontiac or a Chevy. Sometimes a neighbor would be a Ford person or a Chrysler person. I grew up wondering why some people were devoted to brands over style. As a kid, I would have opted for the best looking car! Here I am an adult and I’ve largely been loyal to 4-cylinder sporty cars. My last three cars have been an Acura Integra Type R, a Subaru WRX STi and a Mazda Mazdaspeed 3. My loyalty doesn’t fall along brand lines as much as it falls along performance and “fun factor” lines. But my buying preferences aren’t much different than my dad’s loyalty to GM.

In our efforts to persuade or sell our goods and services, we’re challenged by all this conditioning. Proof of our autopilot behavior is found anytime you get behind the wheel of your car and drive to a common destination, but you don’t fully remember the entire drive. You weren’t paying close enough attention to remember every turn or landmark along the way. You were just blind to most of the things around you. That’s how most of us live as we endure all the media messages designed to sell us something. After a while, it turns into just so much noise.

Prospects behave the same way. They hear your marketing and sales messages and largely ignore them. They don’t even notice them. And if (or when) they do notice, they may lack the subtle details, but no matter – they’ll fill in the gaps of what they don’t know with what they do know. Or what they think they know. Their opinions will likely be based on the tons of stuff they’ve heard over time. True or not. Valid or not.

Generic brands have never been as popular as they are today. Yet, there are likely some things that you purchase out of habit. Maybe it’s Kleenex brand tissues. Or French’s mustard. Or Heinz ketchup. You buy them without thinking about it because you’ve always bought those brands. Changing your mind is almost impossible.

Awareness is the key. We need prospects to be aware of how they’re feeling, of what they’re believing and of their experiences. That presents one key to persuasion – creating a relationship, creating rapport with our prospects.

All this yelling back and forth isn’t accomplishing anything in our society. Nobody ever influenced or persuaded somebody by attacking them or calling them names. Telling people they’re wrong won’t likely do the job either. Attacking the competition won’t work either.

My wife and I had just purchased a house. We were shopping for a sofa and some other furniture so we went to the large furniture store that advertised constantly. It was an enormous store. We were frugal shoppers who went to get ideas so we could think through what we wanted to buy. The salesman showed us around and when he saw we weren’t going to open our wallets on the spot he asked where else we might shop. I ran retail companies and knew he was failing miserably, but I was polite. I told him we didn’t know, that we were mostly out and about getting ideas – something I had told him when he first approached us. He blurted out, “Are you gonna go to (and he mentioned the name of some store I had never heard of)?” I told him I didn’t know and thanked him for helping us.

You know what I did as soon as walked out? That’s right. I found out where that store he named was and went directly there. I figured the store he mentioned must be who he considers his arch-rival. Idiot!

Never mention a competitor! Ever. And don’t get suckered into saying anything about them.

Create and foster curiosity. That’s how our autopilot gets broken. Do this by helping your prospects connect their existing thoughts and ideas to new ideas. Let’s continue this idea in the next show. For now, I want you to stop contributing to the noise thinking if you just yell louder longer, it’ll work. It won’t. You’ll just be wasting your money.

Be well. Do good. Grow great.