Small businesses have many advantages. Being highly maneuverable is chief among them. Speed kills competition and wins in the market. Not recklessness. Speed. Not impulsiveness. Speed.

As an operator, my mantra has long been to make sure the company was highly maneuverable and viciously competitive.

Both involve the factor we all care most about, TIME. 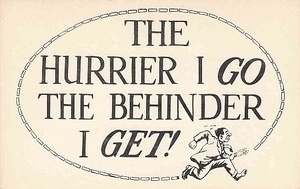 Some business owners operate in a frenzy thinking that speed of motion equals profitable activity. Rarely does that work out. Instead, it most often elevates stress and strain. I’ve never seen panic pay off. It will put you further behind, not further ahead.

Speed is impacted by the mindset behind it. Let me explain. Some entrepreneurs love chaos and frenzy. A hyper approach to everything. These are the folks who have another question before the previous question has had time to be answered. They’re easily distracted. Antsy. Always on the move.

While it may not be thoughtless speed, they may be the only ones who know the thought behind it. Others are frustrated by it. It looks like zaniness and a lot of squirrel chasing. And maybe mostly it is. It may be an addiction to motion. Speed. Moving, moving, moving. Never stand still.

Your organization can likely thrive more with a calmer, more deliberate approach. An approach that gives people time to gather their thoughts, express their concerns and ideas and to ask questions required for clarification. None of those activities slow things down. Quite the contrary, they make speed more advantageous.

Are you an impulsive leader?

Do you give a directive, then completely change directions before that directive ever has a chance to be completed?

Do you ask a question, only to “on the fly” figure out you’ve got a different question – and one you ask right on top of the first one? And one that has nothing to do with the first question?

Do you issue some edict, then hours later forget all about it, and deem it unimportant – even though a number of your staff members have been working all morning on it?

I see it often, which is why I’m talking about it today. Over a year ago I did a video (without audio) that demonstrates the problem of having too many irons in the fire, and not allowing any of them to get hot enough to work with. It’s the “from start to profit” mindset I find myself talking about quite a bit with business owners who find it difficult to focus.

Sometimes owners benefit by thinking about short-term versus longer-term. Execution of an idea – any idea – is easy to consider. Let’s say you’ve got an idea, some innovation you’d like to implement inside your company. You toss the idea out there, but due to your scattershot approach, you’re like a hummingbird who won’t light. You fidget. That idea is still something you’d like to get going, but a week goes by and nobody is working on it. They’re unsure what they’re supposed to be working on. So like my video illustrates, they take a few steps toward executing it, then you change direction so they follow your lead. They’re now moving on something completely different.

Weeks and months pass. Still no execution of your idea.

Compare that with an approach where you quieten things down as you explain your idea. The staff asked questions. Provide input. An hour later the meeting ends and everybody knows what needs to be done at this stage of the game. You’ve got a million other ideas floating around, but you temper yourself. You’re making notes and keeping track, but you’re not about to distract your team from the work at hand. You know that by the end of the week they’ll be ready to launch the first iteration of your original idea. Four days from you telling them about it until it’s some form of reality. Four days!

Funny thing. Owners ruled by thoughtless impulse mostly have no idea how bad it is. They usually know they’re “all over the board,” but they have no concept of how disruptive they are. Frenetic activity begets more frenetic behavior, amplifying stress and anxiety. Even if it makes the boss feel better!

Two words that creep into almost every business building conversation I have. Today, I’m summarizing both into a single term, thoughtful.

Here’s why I like it. It signifies a component of caring, compassion and being considerate. Thinking of others.

That’s why I’ve incorporated it into this conversation about speed. At bats count. Shots at the target. Pick the metaphor you like most. They all refer to the number of opportunities we take. That’s where speed has an impact. The more opportunities we take, the more we learn, the more we’re able to grow and improve. And the faster we’re able to figure out if we want to keep going in that direction. Or if we want to quit and try something else.