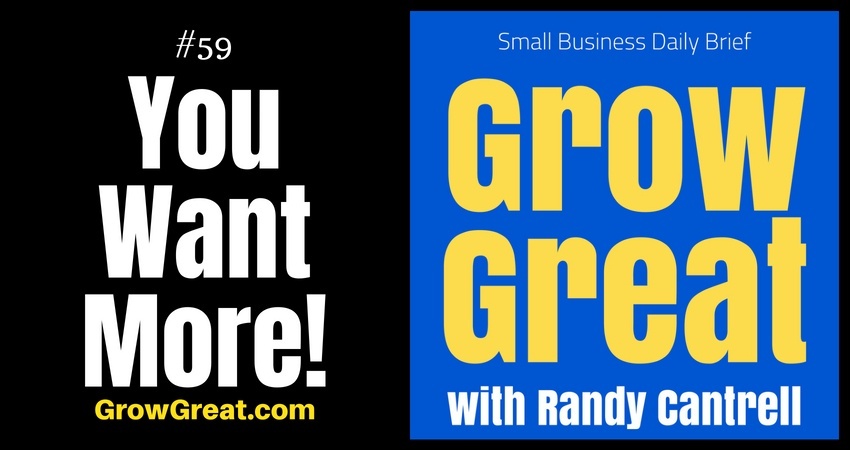 Over 30 years ago I developed what I termed “the trifecta of business building.” I’m not a gambler. Never have been. Honestly, I don’t believe in gambling. Logically or based on my faith. But I took the term “trifecta” because it was the only term that felt or sounded right at the time. I knew a trifecta in gambling terms meant winning the first, second and third place picks in a race. And it’s very valuable! If you can do that, you win BIG.

Well, I’ve spent my life operating successful multi-million dollar businesses. And as I thought about all the issues facing me daily, and all the decisions I had to make, the fires I had to put out…and all the constraints I waged war against…I realized that every single issue fit into one or more of these 3 categories of what I most wanted to accomplish.

I always wanted more of number 1.

I was never satisfied with the level of success of number 2.

And I almost never was able to experience number 3.

I can tell you exactly when it happened. When I figured out this trifecta of successful business building. It was 1983. I was 26 years old and in charge of a $14M subsidiary of a larger company. The founder, about 10 years my senior, had entrusted me with a small chain of luxury retail stores. My office was about 20 minutes away from his, but I would often visit the accounting staff and other people, including the founder. On this particular day I finished my usual rounds and made my way to his office. The door was always open. I walked to the doorway and the lights were out. He had an interior office with no windows so it was pitch black. No sound. No movement. But then as my eyes quickly adjusted to the light I noticed a figure sitting in a chair. I called his name. He responded. I asked, “What are you doing in the dark?” He said, “Contemplating suicide with this letter opener.” (No, he wasn’t serious, nor was he making fun of suicide.)

It was the first time I really gave thought to how crazy our lives were as leaders, executives and business owners. The Rat Race is addictive. We all know it. And we’re completely oblivious to the toll it’s taking on us, sometimes until there’s no escape. But on this day, I was blessed to learn something that most people have to learn much later in life. I was only 26 and already it was clear to me that if our businesses are growing in sales and profits, what’s the point if it drives us crazy? Or if we jokingly want to cut our throats with a letter opener?

Since 1983 I’ve encountered so many brothers and sisters in arms in the business world – leaders, CEO’s, executives, owners (whatever title people prefer) – who feel trapped and smothered. The third leg of hitting the trifecta has grown in importance through the years because NOBODY TALKS ABOUT IT.

The trifecta is today, and has always been (I suspect it’ll never change) an EVERYBODY, SOMEBODY, NOBODY kind of a thing.

Everybody is talking about marketing, sales, business development and customer acquisition.

Somebody talks about delivering extraordinary customer service. Not many, but a few. And I know why. People are lazy and transactional. They want to make the sale, then move on to make the next sale. Often never realizing that by operating like that, they’re failing to build a sustainable customer base that will serve them in a much BIGGER way over the long haul. Besides, it’s not nearly as sexy as getting a NEW customer. And it’s hard because it demands enormous attention to people (our employees and our customers).

Nobody talks about not going crazy in the process of building and growing our business. Mostly because people don’t think it’s possible. They think craziness is the price you pay to achieve business success. And there’s a badge of honor that goes with being a certified member of The Rat Race. So marriages get wrecked, kids end up in drug rehab, health slips and we often think, “Well, you can’t have everything.” But to avoid going crazy in the process isn’t about having everything…but it is about having better and more!

Sky is the limit. There are no bounds to what you may want more of, or what you’d like to be better. And it’s okay. It doesn’t mean you’re greedy or awful. Right now you may feel terrible because of what you want. I don’t know. But I know we all want something – most of us, we want many things. We want more of some things. We want better in others. And we want some things that we just don’t yet – and may never- have!

Desires fuel us. Every day we take actions based on what we want. We want pleasure. We want to escape or avoid pain. To positively and properly harness those desires is the trick. And to deploy activities that can give us a shot at fulfilling them…that’s the real key. Sometimes we know exactly what to do. Other times we’re not sure. And sometimes we’re clueless. But those desires are still there.

High achievers can find a spot between contentment and dissatisfaction. Never fully satisfied, always wanting more. But not miserable in the journey either. Finding joy in the trip to fulfill their quest for more. Or better.

Through the years – especially over the last 4 or 5 – I’ve discovered a powerful reality. And admittedly it hit me later than I would liked. I guess it’s the zig to my earlier zag of discovering the trifecta of business building so young. What I’ve learned is that my entire life has been spent asking and trying to answer the question of what could be. POTENTIAL has driven me my entire life. It’s not discontentment as much as it’s being able to see what might be possible. So when business is good – meaning sales are strong – I’ve always been driven by the notion they could be better. How? Trying to figure that out has been the game of my career. Seeing a future that doesn’t yet exist…one where there’s more. And it’s better!

But that’s not the realization that I discovered over the last number of years. What I discovered that I never knew before was that the potential can be more quickly and easily realized when you enjoin the help of others. If you believe in Meyers-Briggs I’m an INFJ, which means I’m naturally introverted. I often look and behave like an extrovert, but I need alone time to fuel up. When I’m running on fumes, I need solitude. Or I’ll go crazy in the process. But along the way, I didn’t realize how much I could accomplish – how much better I could be and how much more I could achieve – if I simply were more intentional about the people in my life. The people I forged an ongoing relationship with. People willing to let me help them. People willing to help me. A place where we all had a commitment to ourselves and each other. It was an epiphany and I’ve not had too many.

You want to be better. You want better.

You want more. Maybe you want something you’ve never had before.

Today is Monday. It’s the first workday for most of us. I’m asking you to make a bet on yourself – not a gamble, but an investment. I’m asking you to fuel your quest for more with the drive to satisfy it and realize the possibilities by working to make them a reality. I’m asking you to surround with other entrepreneurs who also want more and better. Maybe their list doesn’t look like yours, but they’re entrepreneurs like you so they get it. And they can help. They’re waiting for somebody like you to help them in return. Click that button below – you can visit BulaNetwork.com/iwantmore .