People think we’re among the most squared away people on the planet. We’re human.

One man’s ceiling is another man’s floor.

Jim Goodnight is the co-founder/CEO of SAS, the world’s leading business analytics software vendor. With over $3.2 billion in annual sales and over 14,000 employees, and a net worth in excess of $9B, Goodnight has likely managed to overcome most of his self-limiting beliefs since 1976, the year SAS was founded. I’m a big fan of his leadership skills. And his intellect. I’d imagine he would tell us that along the way there were many times he never believed the company would reach these heights.

It’s always interesting to me to hear stories of highly successful people who confess they didn’t think their success would be so extreme. From Hollywood actors and actresses to musicians, to professional athletes, to business people. People set out to pursue a dream and a few hit a height beyond their wildest dreams. Talent, determination and whatever else is required for big success converge and some people are able to embrace new beliefs along the way. What was once thought impossible begins to be seen – beforehand – as being very possible.

Jim Goodnight may be the CEO of a 42-year-old, multi-billion dollar company, but I guarantee he has figured out a thing or three along the way. Beliefs matter. You already know that. The problem is what you don’t know – and what you don’t yet believe. That’s my problem, too. So you’re in grand company.

Not long ago I was talking with somebody who told me, “I’d like to know what it’s like to make $50,000 a year. I’ve never made more than $42,000.” The topic just jumped up and slapped me in the face. When the conversation was over I kept thinking about it. This person had skills. He had marketable skills, and talent and experience. My empathy drove a bit of sadness that he couldn’t see what was possible. No matter that I could see it, my vision isn’t what mattered. His did.

I slipped on my headphones and launched some Van Morrison, Days Like This. It’s what I do when I get contemplative. I’m often contemplative…which is why I listen to a lot of music. Late at night mostly.

Your beliefs don’t have to deal with money.

Still, others dream of achieving greater happiness and calm in their personal lives.

Dreams are fueled by a variety things, covering as many aspects of life as exist. Sometimes they’re possessions. Or accomplishments.

Most of us have this glass ceiling. It’s not the glass ceiling imposed on us. Nobody built it and put it over our head – even though some may have contributed. That doesn’t make it less real. We’ve made choices and decisions. Likely without even knowing what we were really doing to ourselves. And by extension, the people who matter to us. We imposed these beliefs on ourselves.

Build a bridge and get over it.

It’s more complicated than that. And way harder than that.

First, we have to learn how to build the bridge, which is a ridiculously tough feat when we’re dealing with our beliefs. Mostly, we don’t even know where to begin. We just believe what we believe. Like the guy who believes earning $50K a year is beyond anything, he’ll ever accomplish.

Here’s the key thing I want you to think about as we enter the weekend. When I told you that I could easily see this guy’s ability to earn that much, and likely a whole lot more…I said it didn’t matter what I thought or believed. But I wasn’t being completely truthful. Because it does matter what I believe IF I’m part of this guy’s life. Especially if I were part of his ongoing life. I’m not and that’s okay. We were just having a casual conversation. But between the songs Van was singing in my headphones and the late night hours I kept thinking about what others believe, or know to be true versus what we know, or believe to be true. I’ll credit Van for sparking a bout of clarity.

The people in our lives – the people we allow into our lives on an ongoing basis – have beliefs, feelings, thoughts, and ideas that matter. Well, they *can* matter if we let them. We often discount some people and overvalue others. Now I don’t know any facts of Jim Goodnight’s journey up the corporate success ladder, but I’ve watched him from afar for many years. I’ll make some assumptions based on my intuition, which is usually operating at a heightened awareness.

He’s a serious scientist with hardcore math and statistic training. He was crafting analytics when nobody even knew what analytics were. Are we to suppose that Jim needed to naturally have beliefs that he could navigate the business world and in 40 years have a company performing in excess of $3B annually? Are we to suppose that he did it alone, without feedback, input, and beliefs shared by others? Are we to believe that only other founders of multi-billion dollar companies could have possibly helped him figure some things out? And that those multi-billion dollar CEO’s had to also be in the analytics arena?

Are you beginning to get my drift? Then let me make it really clear. Surround yourself with people capable and willing to see, hear, understand and believe things that you may be unable to see, hear, understand and believe. It’s not important for them to be where you want to be. Jim Goodnight didn’t always run a multi-billion dollar company. He figured it out. And like all super achievers, he had help. I’d wager that there’s not a single billion dollar business owner among the group that helped him figure it out. I’ll also wager that there were plenty of people who could see things, hear things, understand things and believe things that Mr. Goodnight couldn’t. They likely helped him.

The reality of self-limiting beliefs is that they’re REALLY limiting. And they’re inside of you. Which is why it’s so urgent that you have outside help – people unencumbered with your head trash to see things, hear things, understand things and believe things you’re not yet able to. But you will. With their help. Provided you get their help. You’ve got to make it happen. Right now, all you have to do is one simple, but often difficult thing – something that will potentially change your life – 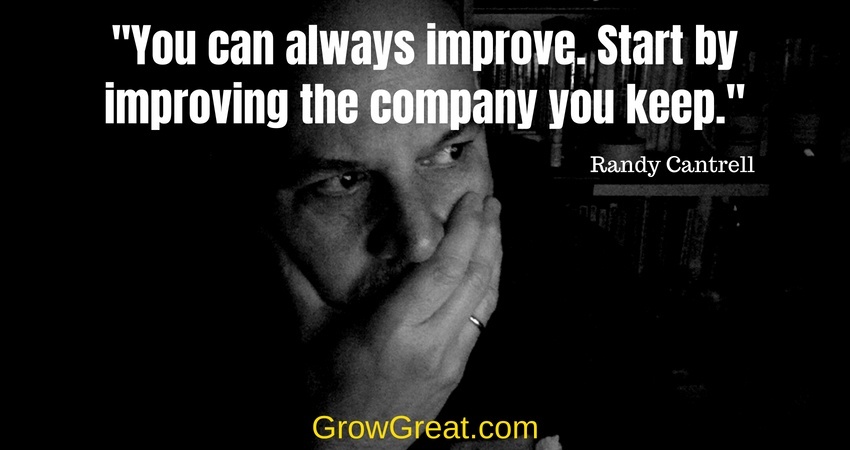 I shared this graphic earlier this week on social media because it’s at the heart of the whole matter. And it’s why much of my current efforts are driven to launch just one (maybe two) groups of 7 entrepreneurs at The Peer Advantage. I’m intent on providing you the safe, secure space required to get this level of help. Super help for super achievers.

Have a great weekend.