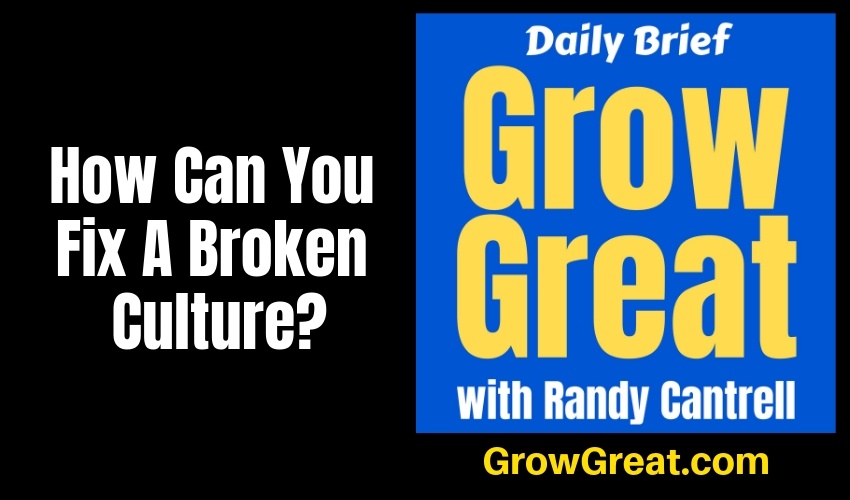 I’ve been asked versions of this question, and this direct question, many times. Other than employee engagement I don’t think another topic dominates leadership conversations. But they’re very related. When employees are disengaged, culture isn’t going to be highly productive. Not for long.

Let’s begin with the fact that culture can be broken and it can also be fixed. And we must acknowledge that no matter what you do as a leader or business owner, a culture exists in your organization. I sort of approach this the way I do those stories our people create. We can give people an accurate, truthful story or they can write their own. Leaders can create a better, more accurate picture so why leave it to chance. Ditto on cultures. Leaders should be busy creating and fostering the most productive, high performing culture possible.

I’d love to give you some standard “I know this will work” kind of an answer, but I can’t. Without knowing the context of HOW a culture is broken or what a person means by “broken” – it’s impossible.

I once knew a CEO who was a lifelong autocrat. An autocrat is defined as a ruler who has absolute power or someone who insists on complete obedience from others. Autocrats are domineering control freaks. It’s all about them. Well, this particular autocratic CEO didn’t like the culture of his company in the least. He felt it was broken because people didn’t always do exactly what he wanted when he wanted or in the way he wanted. Sometimes they actually made decisions without him. How dare they? Talk about a bunch of hellions. Can you imagine employees who actually made decisions on their own? 😉

Yeah, that was about how I reacted to him. Truth was, the culture wasn’t broken. He was.

Let’s look in the mirror as leaders. Why do you think your culture is broken? What’s broken in your opinion?

Describe it. In detail.

You can do that by writing it down, recording it into the voice memo app on your phone, or you can talk with somebody who has an unbiased viewpoint. This is the best starting place.

It’s not a challenge to your notion that the culture is broken, but it’s an attempt to get to the heart of what’s happening. If you’re the top dog, the number 1, then this is a crucial exercise because YOU have a major impact on the culture. It’s rare to see a culture impacted some somebody more than the top dog. It’s possible but rare unless…there’s a personality among the leadership team that is prominent or dominate. And unless the top dog has acquiesced presence and authority to somebody else. So we have to consider those possibilities.

Do those situations apply? That’s for you to determine.

So with that, let’s dive into what constitutes a high performing culture where employees are committed to doing the best work of their lives. Sounds too good to be true, huh? Well, it’s not. It’s fully within reach if you’ll make it a priority and do the work without compromise. So I encourage you to believe.

I’m going to take a simple 3-prong approach to this. You can make your own application.

What you believe is the foundation of the culture you’ll create, tolerate and foster. If we refuse to start here, then we’re just dealing with tactics and strategies. They matter, but only if they’re coming from a place of honesty and truth. Namely, what you believe to be true.

Your culture will reflect your beliefs. And the collective beliefs of your organization. So these matter a lot.

If you’re displeased with the current state of things – your present culture – then spend time looking closely at what you believe. And what your leadership team believes. It may be helpful to pull the team together and have some deep discussions about it. Wrestle this down. Do whatever it takes because until you get this ironed out, there’s not going to be any positive movement. My suggestion is that you instill the fact that this work is a priority for you and your leadership.

Craft a statement that collects your beliefs. These are like fuel for the culture engine. All decisions, discussions, and behaviors are going to stem from these beliefs. They’ll all be congruent with the beliefs. You will not make any decision, or have any discussion, or behave in any way that isn’t in agreement with what you believe. You can act, but you’re not that good. If you were, you’d be in Hollywood. At the end of every day, we’ve been who we truly are. We can improve that, but it has to begin with our commitment to what we believe. Change what you believe and your behavior will change.

Last week I talked about this in episode 134. It was an episode on leadership, particularly on our expressions of belief. Go back and give it a listen.

“After all is said and done, more is said than done.” Somebody said that and I suppose it’s true, but it incorrectly minimizes what’s said. And what is heard and understood.

Messaging is important. We’re creatures who communicate. We talk. We write. We draw. We watch. We’re computing a zillion little signals to read situations and people. It’s all communication.

What you communicate and how you communicate contribute to the culture. You can communicate the same thing in a variety of ways that will produce different emotions and thoughts. The situation and context matter, too.

Be yourself. Be your BEST self.

Being an authentic jerk and communicating that isn’t going to help things. GROW GREAT isn’t focused on just making money, or achieving financial success. It’s deeper and broader than that. Plenty of jerks achieve financial success, but that doesn’t make them good people.

Let’s assume you’re good people and you’re working to be even better. Good. No, GREAT!

What you do matters. But first what you believe matters. And what you say or communicate matter. In short, it all matters.

Your culture is a direct reflection of these 3 things. I’ve simply put them in the order in which they naturally occur. First, we think (or believe). Then we communicate (if only to ourselves). Then we act based on those things.

Organizations focus mostly on the output. Too rarely do they give due consideration to beliefs and communication though, the precursors to actions, which directly give us the output.

It’s the big disconnect. We say we believe something, but we make decisions and take actions that aren’t congruent with that. The workforce is confused, trying to resolve the obvious differences they perceive.

I would NEVER advise it, but tyrannical leaders would be better off owning their tyranny. “Yep, we’re going to take every advantage of you we can. We’ll get every last bit of life from you that we can because we only care about one thing – bottom line profits. We don’t care about your quality of life, or how fulfilled you feel. We care about our expensive homes, our expensive toys, and our luxury lifestyle. So dig in and get this work done so our incomes will soar this year!” The honesty would at least be refreshing.

We all know why this doesn’t happen. Nobody would work for such a person unless they were money whipped with an income that trapped them. It happens. Not commonly, but it does happen.

So the tyrants have to fake being good people. They have to con their workforce. They pretend to be one thing, but they’re really somebody different.

Sometimes these tyrants have an interest in company culture because they know the game. Feign interest in the things best for the company and the people. Workers know when the leader is a fake. My best advice, “Run!” Don’t convince yourself they’ll change and suddenly become a good person. It’s possible but highly unlikely. Don’t risk your life and career. Not a safe bet.

On the flip side, there is no excuse for good people to fail at creating a good culture.

Sometimes leaders read too much. It’s not the reading that problematic. It’s that leaders start trying to execute what they just read. The problem is the reliance on a tactic or strategy instead of relying on your deep beliefs to drive communication and action. So you’re tempted to hop around from the latest, greatest, coolest, trickest culture building tactic to the next. And it exhausts your people. They never know what’s coming next. They all know you’re reading, or listening to somebody, or attending another seminar. And they’re dreading the result. It doesn’t stick. Nothing sticks until you start getting in touch with what you firmly believe – the things you just won’t waver on.

So, grab the mirror. Look intently at yourself. Take responsibility for the culture you now have and the one you want to build. Be accountable to every person inside your organization. Be accountable to every person served by your organization. Welcome to leadership. I know it’s lonely, but I’ve also got an answer for that if you’re a US-based entrepreneur. Check out ThePeerAdvantage.com.